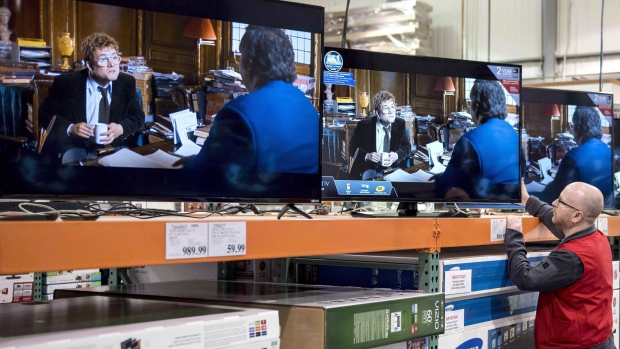 An employee adjusts a television set at a store in Ottawa, on March 1, 2016. The country's broadcast regulator says tens of thousands of Canadians have either signed up for the first time or switched to the recently mandated skinny-basic TV packages. The Canadian Radio-television and Telecommunications Commission says more than 66,000 consumers have signed up to the new basic TV packages in the five weeks since cable and satellite service providers were required to offer them. THE CANADIAN PRESS/Justin Tang , The Canadian Press

TORONTO — The country's telecom watchdog says in its annual report that it received more consumer complaints about TV services than any other, despite those gripes falling outside its purview for nearly another year.

The Commissioner for Complaints for Telecommunications Services (CCTS) says it received 8,678 complaints about TV issues between Aug. 1, 2015, and July 31 of this year. That's up from 7,294 similar concerns during the same period a year prior.

But TV complaints won't fall under the CCTS's mandate until September when it will begin to assess, accept and help resolve consumer beefs about these services.

Currently, the CCTS can only address complaints about cellphone, land line, Internet and long-distance (including prepaid calling cards) services, as well as operator services, directory assistance and white pages directories.

The watchdog says it accepted 8,197 individual complaints, which addressed an average of 1.9 issues each. All together, it dealt with 7,931 issues about wireless, 4,177 issues about Internet and 3,086 issues about local phone services.

Billing was the No. 1 consumer grievance in each of the three categories.