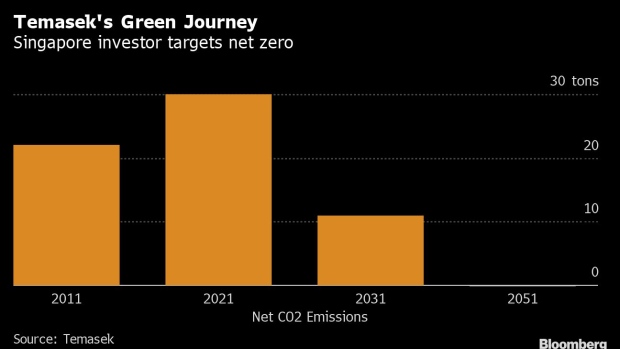 (Bloomberg) -- It might seem contradictory to invest in carbon-emitting polluters while pledging to be an eco-trailblazer, but that’s exactly what Singapore state investor Temasek Holdings Pte is attempting to do.

As one of the world’s largest institutional investors, its $282 billion portfolio is replete with businesses that contribute to global warming -- from Singapore Airlines Ltd. to Sembcorp Marine Ltd., a supplier of offshore rigs. While peers like Norway’s sovereign wealth fund have used hard targets and the sale of assets to improve their green credentials, Temasek is taking a different path.

“We never said we will not invest in an emitter of carbon - as long as this emitter is on a journey, a path and we can be helpful in terms of how we can shift them,” Nagi Hamiyeh, Temasek International’s joint head of investments, said in an interview.

Temasek’s approach is emblematic of the delicate dance many global investors face, especially those laden with legacy assets that once belonged to the state. The pressure of maintaining returns without causing social upheaval and job losses while pledging to be green can be hard to reconcile, especially in a city-state where refined fuels and chemicals accounted for almost a quarter of merchandise trade in 2019.

Temasek has pledged to halve the net carbon emissions of its portfolio compared with 2010 levels by 2030, and reach net-zero by 2050. It’s ramped up the amount of money it allocates to impact investment and environmental, social and governance funds. In April it teamed up with BlackRock Inc. to form Decarbonization Partners, aiming for a $1 billion initial fund to back startups that can cut the world’s reliance on fossil fuels. It’s also backed an Indian renewable energy investment vehicle and a carbon trading platform.

But Temasek remains the biggest investor in two of the world’s biggest oil rig builders -- Keppel Corp. and Sembcorp Marine. Last month its unit signed an agreement to help Keppel sell its built and uncompleted rigs, some of which could be used to mine fossil fuels. And in February, its wholly-owned subsidiary Heliconia Capital Management Pte helped fund a $600 million rescue package for the country’s biggest shipper, known as Pacific International Lines Pte. Other holdings include Pavilion Energy Pte and PSA International Pte, a port service company.

The firm has also pumped billions of dollars into Singapore Airlines, a major global carrier. Hamiyeh said that unlike peers, the airline hasn’t canceled new aircraft purchases, allowing it to upgrade to models that emit less carbon. The carrier has pledged to hit net zero by 2050.

The emissions attributable to Temasek’s portfolio jumped 36% to 30 million tons of carbon dioxide equivalent this year, from 22 million tons in 2011, according to the investor’s annual report. Some of these energy and transportation stocks have been a drag on performance for Temasek, which last week reported a 10-year annualized gain of 7%. Over the same period, Singapore Airlines’ annual decline was 2.1%, while Sembcorp Marine’s was 25% and Keppel’s 3.2%.

In the meantime, Temasek is influencing how corporations around the world think and invest in environmental sustainability. Its staff participate in public forums, it’s a member of Singapore’s Green Finance Working Group and it takes part in dialogues with bodies like the Sustainability Accounting Standards Board.

Temasek’s narrative is shared by many peers, particularly in countries that produce fossil fuels or are still heavily reliant on coal or natural gas as power sources. Australia’s UniSuper Management Pty is the biggest shareholder of gas distributor APA Group even while it has more than 12% of its $75 billion in assets in sustainable investments. Canada’s $400 billion national pension fund still holds large stakes in energy stocks like Canadian Natural Resources Ltd.

In Temasek’s view, rather than palming off a polluting asset to a third party or shutting it down, it’s better to fund their adaptation.

“We much prefer to work with our investee companies: Can you reduce your emissions? Can you replace your emissions with a different technology,” Neo Gim Huay, Temasek International’s climate change strategy managing director, told reporters last week. “It is a global problem and we prefer not to pass the problem to someone else.”

The approach is lauded by some investors who argue that change from within can be more effective than unloading assets. Christoph Klein, founder and managing partner at ESG Portfolio Management - a Frankfurt-based asset manager with funds targeting sustainable outcomes - uses the example of a hypothetical renewable energy investment in Norway.

“You’d make a much bigger difference helping an Indian coal company to change its energy mix and to significantly reduce emissions,” he said. “But there’s a risk that some investors can say they’re helping a coal company transition without really pushing hard for change.”

Critics say carbon abatement is almost never as good as avoiding the emission in the first place. If Keppel’s uncompleted rigs were off the market, they couldn’t be used to pump oil or gas and the price of offshore exploration may increase. And if a lack of capital forced Singapore Airlines to slash services, then higher prices would potentially curb travel.

“Temasek should no longer be supporting any sector that’s strongly connected to or supports fossil-fuel burning and deforestation,” said Hindun Mulaika, a climate and energy campaign manager for Greenpeace in Indonesia. “Considering carbon offset options without pushing hard to divest from highly polluting sectors is just not enough.”