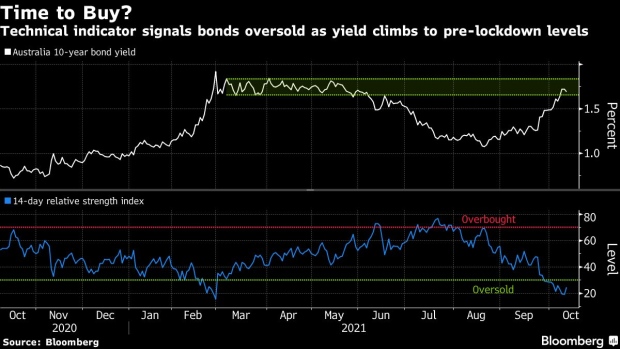 (Bloomberg) -- Australia’s bonds are good value after their recent slump as the central bank is likely to keep interest rates low despite signs inflation is quickening, fund managers say.

The lift in yields has been an opportunity to add positions in Australian bonds, said Chris Siniakov, head of Australian fixed income at Franklin Templeton in Melbourne. “It worked well earlier this year when yields retraced lower through July-August, and we expect yields will begin plateau from around here before” falling again in coming months, he said.

Siniakov said inflation will only become persistently higher once much of the world sees several quarters of above-trend growth. Reserve Bank of Australia “Governor Philip Lowe gets this, and it appears he will stare down the market until these conditions are met,” he said.

The slide in Australia’s bonds over the past two months has largely been driven by external factors. Global debt markets have pummeled by expectations that surging energy costs will push up inflation, even as the Federal Reserve reiterated its commitment to cut back on bond purchases.

Aussie bonds have also declined as state governments have announced the end to long-standing lockdowns in the nation’s two largest cities -- Sydney and Melbourne -- and the federal government has made a commitment to reopen the country to international travelers.

Not everyone agrees this is a good time to buy.

Central banks may be saying they’re happy to let economies run hot but that stance could change quickly once they come under criticism, said Bill Bovingdon, chief investment officer at Altius Asset Management Pty. in Sydney. There’s also a risk high inflation will be more persistent due to rising energy prices and supply-chain issues, so it makes sense to maintain a conservative stance, he said.

“While I think markets are more fairly priced now, they don’t look sufficient to cover all of that inflation risk,” Bovingdon said. “If markets consolidate around here, then we’ll probably be more confident to jump back in and add some bonds into our portfolio. But we’re not doing it yet.”

Still, while yields are approaching the level where they look attractive, timing the move is challenging given the increased volatility, said Chris Rands, a portfolio manager in Sydney at Yarra Capital, which purchased Nikko Asset Management’s Australia business this year.

“It’s not smart to get in early,” he said. “I was tempted to try and dip my toe in” this week but “it will only be small if we do.”