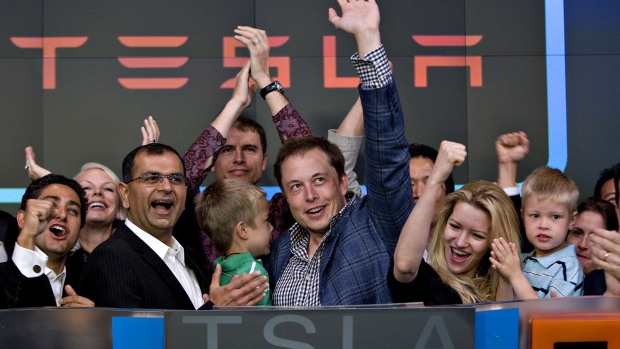 Tesla Inc. has grown from Silicon Valley gadfly to the world’s second-largest automaker by market capitalization in the decade since its initial public offering. It’s been a roller-coaster ride for the electric-car maker’s shareholders, who have experienced dizzying swoons on the way to record highs thanks in part to self-inflicted crises.

“There’s always a lot of drama with Tesla, but they have spurred the auto industry on to embrace electrification as key to the future of mobility,” said Tony Posawatz, the former leader of General Motors Co.’s Volt plug-in hybrid program, ex-CEO of Fisker and current director at Lucid Motors Inc. “Whether they are profitable or not, they have impacted the luxury auto market forever more.”

On June 29, 2010, Tesla made its debut as a public company -- the first initial public offering of a domestic automaker in a half century. The IPO price was US$17 a share. Chief Executive Officer Elon Musk rang the Nasdaq opening bell, and the company’s lone electric car, the US$109,000 Roadster, was on display in Times Square.

A decade later, Tesla’s stock is trading at US$959.74 a share, the company has grown to about 48,000 employees and its influence on the global auto industry is unprecedented. Despite plenty of doubters and some near-death experiences, Tesla’s US$178 billion market valuation is second only to Toyota Motor Corp. among all carmakers.

Tesla no longer makes the Roadster, but it sells four other models in markets around the world. Besides design, one of the company’s biggest advantage lies with its batteries: A version of the flagship Model S now boasts a range of more than 400 miles. No other electric car comes close.

“Their products create a lot of enthusiasm among customers,” Posawatz said.

As Wall Street waits for the company to report second-quarter production and delivery figures later this week, here are 10 key moments that shaped Tesla’s extraordinary decade.

In January 2010, the U.S. Energy Department awarded Tesla a US$465 million loan as part of the Advanced Technology Vehicle Manufacturing Program that President George W. Bush signed into law two years earlier. The funding came at a critical time, with the nation was still clawing its way out of the Great Recession. In May 2013, Tesla paid off the entire loan with interest. The DOE program has now become a model of clean-energy stimulus spending.

In May 2010, Tesla stunned the world when it announced it was buying a shuttered auto plant formerly run by Toyota and General Motors Co. in Fremont, California, and Toyota was investing US$50 million in the startup. The surprise deal was unveiled by Musk and Akio Toyoda, Toyota’s president, who flew in from Japan for the announcement. The Fremont plant still produces the bulk of Tesla’s cars, but the company now has a second car-assembly plant near Shanghai and is building a third close to Berlin.

In December 2012, Motor Trend named the Model S its 2013 Car of the Year. It was the first winner in the 64-year history of the award not powered by an internal-combustion engine. The nod showed established automakers that battery-powered cars could be more than just nerdy science projects and gave the Tesla brand a huge boost.

In September 2014, Tesla announced it had chosen Nevada as the site for the automaker’s first battery-production “gigafactory,” with Panasonic Corp. as its partner. The news capped fierce battle among states hoping to land the economic-development project. The plant demonstrated Tesla’s drive to vertically integrate its supply chain all the way down to the battery-cell level. Tesla is now making moves to establish its own cell-manufacturing operation in Fremont, and investors are eager to hear more at a “Battery Day” event in September.

When Tesla unveiled the Model 3 sedan in March 2016, customers lined up in a way the world had grown accustomed to seeing consumers queue up for iPhones. The promise of a US$35,000 mass-market car barely materialized -- the average transaction price is closer to US$50,000 -- but the Model 3 managed to rival mainstream sedans on sales charts. The company is now trying to tap into a growing segment of the market with the Model Y crossover.

On May 7, 2016, a devoted Tesla customer and former Navy SEAL, Joshua Brown, died when his Tesla Model S collided with a tractor-trailer in Florida. Tesla’s driver-assistance system Autopilot was engaged at the time, and the death was the first known fatality involving the technology. U.S. regulators investigated but found no defect. Autopilot continues to come under scrutiny, and several other fatalities in the U.S. have been linked to the system.

In June 2016, Tesla announced it was making an offer to buy SolarCity, a solar-panel installer Musk founded with his cousins. The conflicts of interest were stark: Musk was SolarCity’s largest shareholder and the chairman of its board. SolarCity was struggling financially and Tesla had just unveiled the Model 3, but Musk pitched the acquisition as a “no brainer” and announced a new tiled-roof product to sell investors on the acquisition. The rollout of the Tesla-branded roof has been slow, and the deal itself continues to be contested, with a lawsuit by Tesla shareholders slated to begin next month in Delaware Chancery Court.

As foreshadowed by Musk’s prediction the previous fall that Tesla would find itself in “production hell,” 2018 was a crazy year. Tesla struggled to mass-manufacture the Model 3 and built an assembly line under a massive outdoor tent to boost output. Scores of executives left. In July, Musk called a British cave diver a “pedo guy” on Twitter, triggering a defamation lawsuit. The following month, Musk shocked investors and his own executives when he tweeted about taking Tesla private at $420 a share and said he had “funding secured.” Three weeks later, in a late Friday night blog post, Musk backtracked and said Tesla would remain public. A month later, the U.S. Securities and Exchange Commission sued Musk for securities fraud. The settlement stripped Musk of the chairman role for three years -- meaning that Musk could become chair again in late 2021.

Tesla scored a major win in the midst of all the 2018 drama by becoming the first American automaker to be allowed to build a manufacturing plant in China without a local joint-venture partner. Tesla’s factory near Shanghai started delivery of its first vehicles on Jan. 7, one year after breaking ground. China is the world’s largest auto market and a huge part of Tesla’s future growth plans.

In November, Musk unveiled the futuristic Cybertruck, an angular pickup shaped far differently than a Ford F-150. The real show stopper was when Franz von Holzhausen, Tesla’s long-time design chief, smashed two of the truck’s ostensibly shatterproof windows with a metallic ball. The botched demo generated an enormous amount of buzz. Tesla wants to build a plant for the Cybertruck in the U.S., and sites in Texas and Oklahoma are the two finalists.