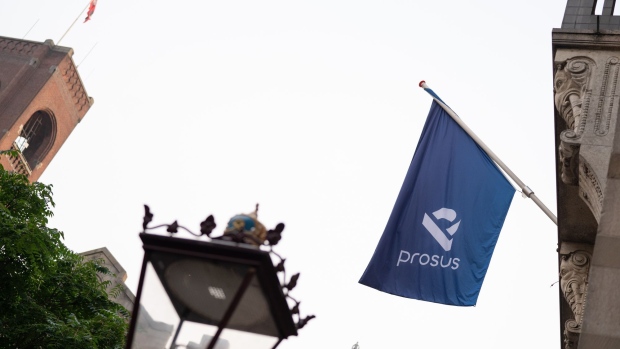 A Prosus flag is displayed ahead of the trading debut of the new Prosus NV unit of Naspers Ltd., outside the Amsterdam Stock Exchange, operated by Euronext NV, in Amsterdam, Netherlands, on Wednesday, Sept. 11, 2019. Naspers will retain 73% of the new company, which will house everything from a 31% stake in Chinese online giant Tencent to food delivery and advertising firms from the U.S. to India and Brazil. Photographer: Jasper Juinen/Bloomberg , Bloomberg

(Bloomberg) -- An arm of South African internet giant Naspers Ltd. sold almost $4 billion worth of stock in JD.com Inc. that it got as dividends from investee Tencent, saying the e-commerce firm didn’t fit with its broader strategy.

Naspers subsidiary Prosus NV sold more than 131.8 million shares in JD it got from Tencent Holdings Ltd., about a 4% stake in the online retailer, Prosus said in a statement. “JD.com does not form part of the group’s core strategic focus,” it said in a filing Monday.

Tencent, China’s largest social media company, said in December it planned to distribute its stock in JD.com as dividends to shareholders,  a surprise retreat from the e-commerce firm after Beijing moved in 2021 to curtail the power of tech monopolies. The stock was worth about $16 billion at the time.