Chinese media including the Communist Party’s flagship newspaper toned down their criticism of the games industry on Wednesday, helping Tencent Holdings Ltd. and its peers recoup some of their losses from a market rout a day earlier.

Instead of calling video games “spiritual opium,” as a Tuesday article in the Economic Information Daily had, the People’s Daily published an editorial in its overseas edition that stressed the need for government, schools, families and society to work together to better protect children from excessive gaming. Controlled by the Party’s Central Committee, its positions on issues are widely seen as reflecting the views of China’s most senior leaders.

Hu Xijin, editor of the government-controlled Global Times, commented on his WeChat account that the Economic Information Daily article was a “normal” news story but its timing led to “over-interpretation” by some. The latest regulatory measures are aimed at directing the healthy development of the internet and tech sectors, and companies should actively cooperate, Hu wrote. Gaming addiction is a serious issue but resolving it requires comprehensive measures, he said.

“I can hardly imagine that the authorities would just simply ban online gaming once and for all,” Hu wrote.

Tencent rose 2.4 per cent in Hong Kong, clawing back a portion of its 6 per cent Tuesday loss. XD Inc. gained 1.7 per cent after diving more than 8 per cent previously. 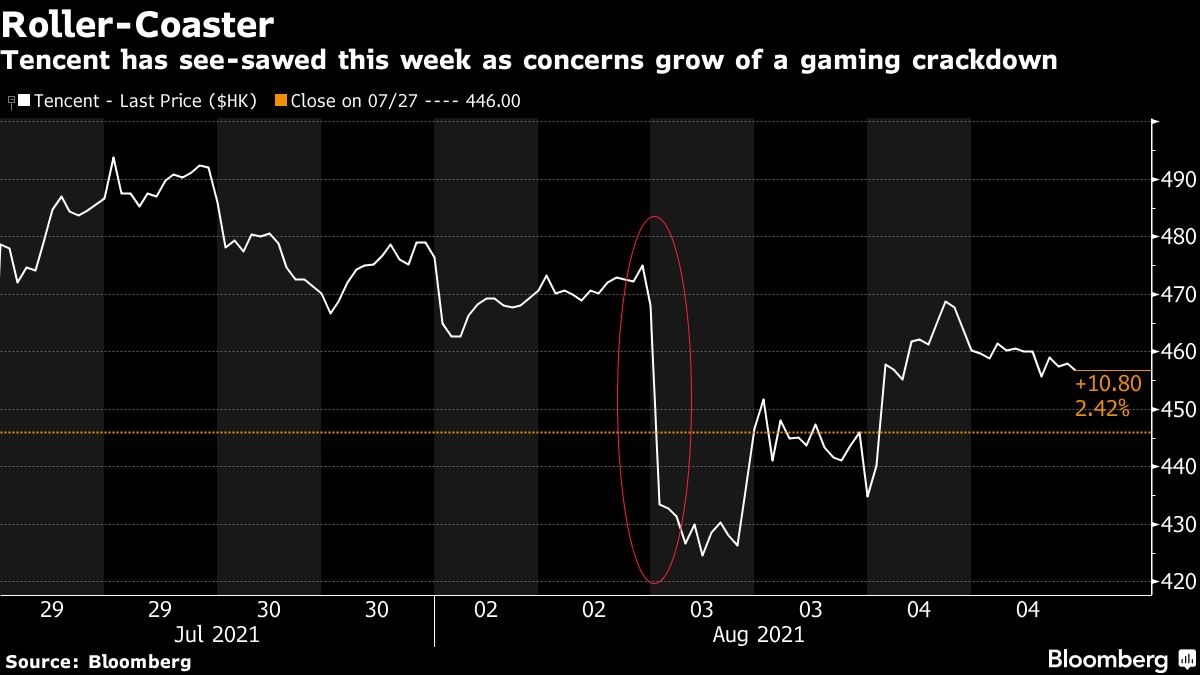 The developments this week stoked fears Beijing will next train its attention on an arena that’s pivotal to the bottom line of media giants from Tencent to Apple Inc. and Activision Blizzard Inc. They come after a tumultuous few weeks of regulatory action that at one point wiped out more than US$1 trillion of market value from Chinese stocks. Tencent, responding to Tuesday’s blistering critique, pledged to curb game time and even broached a sweeping ban on gaming for kids.

While the People’s Daily editorial employed softer rhetoric, it nonetheless highlighted the adverse effects gaming can have on children, as did other outlets such as the Securities Daily and the China News Service. That suggests greater scrutiny of the sector is likely, though perhaps not as severe a crackdown as on the country’s after-school tutoring industry last month.

“Even though the wording may seem less harsh today than it was yesterday, that doesn’t change the fundamental theme of late -- making Internet giants give up some of their profits and to give more spending power to the people,” said Fang Rui, managing director at Shanghai WuSheng Investment Management Partnership. But regulations will vary by industry and those for the gaming sector “won’t be as brutal as those toward education,” Fang said.

Among other media that chimed in on the issue Wednesday, the Securities Daily said on its front page that pushing for healthy development of the industry was a pressing matter and called preventing video-game addiction among minors “the bottom line.” The China News Service said late on Tuesday that it was “immoral” to blame schools, companies or parents alone for children spending long hours playing video games.

Even the Economic Information Daily took steps to soften its wording. The commentary that sparked Tuesday’s sell-off was removed from its website Tuesday afternoon, only to reappear hours later with the terms “spiritual opium” and “electronic drugs” removed from the article.