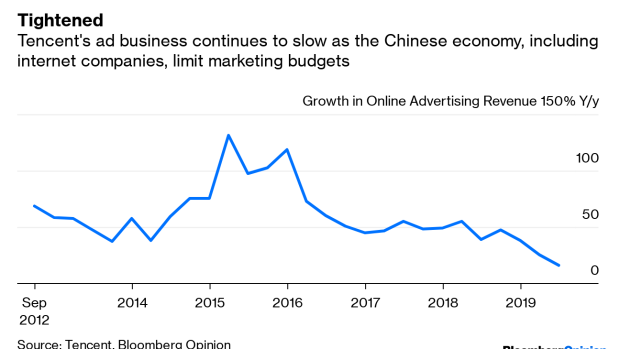 (Bloomberg Opinion) -- Tencent Holdings Ltd. did itself a great favor in the second quarter by cutting its marketing budget 26% from a year earlier.

The Chinese games and social media giant recorded a 21% growth in revenue for the period, the third lowest rate in a decade. Yet it managed to post a very healthy 35% rise in operating profit. That fiscal discipline was key: had it spent on marketing at the same ratio to sales as a year earlier, operating profit would have been around 11% lower.

Unfortunately for Tencent, though, clients are also cutting their marketing budgets. In a column earlier today, I noted that investors may be willing to venture back into Chinese internet stocks if executives show restraint after a profligate 18 months when marketing budgets ballooned.

Tencent’s advertising revenue shows the flipside of such a trend extending across the industry and wider economy. Growth in its ad business was a record low 16.3%, hurt most by a 7% drop in media ads – those placed alongside content on its platforms such as Tencent Video. Not all of this revenue comes from within the internet sector since it can also benefit from offline clients. Additionally, company-specific issues such as a high base from last year’s football World Cup and the delayed airing of top-tier dramas also weighed.

Even so, this is a trend that can’t be written-down as one-time factors. Last quarter’s 25% growth rate was the slowest in a decade. It’s also facing stiff competition, especially from the increased popularity of short-video apps like ByteDance’s TikTok. Tough times will continue, Tencent warned in Wednesday evening’s statement:

We expect the negative impact from the current business environment will persist in the second half of 2019.

Thankfully for Tencent, online advertising accounts for only 18% of sales . Its online games and social networks business – which includes WeChat messenger -- delivered 54% of its revenue last quarter. But if an advertising slowdown portends weakness across other segments, such as games and content subscriptions, Tencent will need to keep its belt tight while hoping clients do not.