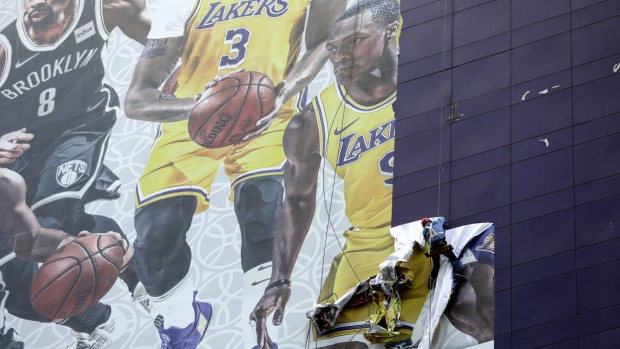 The National Basketball Association, Activision Blizzard Inc. and now one of its most important portfolio companies, Fortnite proprietor Epic Games Inc., have all sparked political controversy at a time of increasingly assertive Chinese nationalism online.

A tweet by an NBA executive expressing support for Hong Kong protesters drew the ire of Beijing, throwing into question the billions Tencent has invested in the U.S. sports league. Then Blizzard, partly owned by Tencent, banned a gamer for endorsing Hong Kong’s pro-democracy movement, triggering a boycott of the company’s games for its apparent kowtowing to China. Most recently, Epic Chief Executive Officer Tim Sweeney tweeted his disagreement with the Blizzard action, eliciting calls for a boycott of its Fortnite game among Chinese players incensed by the perceived slight.

At stake for Tencent are billions of dollars in ad and subscription revenue, along with its entire strategy of becoming a go-to destination for NBA broadcasts. Tencent had almost half a billion basketball aficionados tune in last season. That audience is now in jeopardy after Tencent halted game broadcasts in the wake of the Hong Kong controversy.

Tencent had just inked a $1.5 billion, five-year deal to stream NBA games online in China. Its suspension of broadcasts followed a similar move by state-backed CCTV.

Tencent uses the online streams to sell ads, and the gargantuan scale of the audience drives its marketing business, which is expected to be a key driver of Tencent growth going forward. To spruce up its investment, Tencent has been developing memorabilia, entertainment shows and video games based on the NBA.

“Advertising of Tencent sports will likely take a hit. NBA is the star of Tencent sports, so it could cause a contract of Tencent’s advertising growth further,” said Michael Norris, a Shanghai-based research and strategy analyst at consultancy AgencyChina.

A single tweet from the Houston Rockets’ general manager supporting Hong Kong’s protesters was enough to spark a chain reaction, including an abridged history lesson by Alibaba Group Holding Ltd. Vice-Chairman Joe Tsai, majority owner of the Brooklyn Nets. Alibaba has also yanked Rockets merchandise from its online stores, causing harm to both the NBA and Alibaba’s bottom line.

After initially apologizing, the league went on to express its support for staff’s freedom of political expression via a statement by Commissioner Adam Silver. That sparked another round of fury in China, threatening to prolong the clash and the blackout.

Tencent’s gaming portfolio is leading to more controversy. Blizzard’s stern reprimand of the pro-Hong Kong player was popular in China, but drew outrage from the U.S. to South Korea. Online, gamers called for a boycott of the company and proudly posted their cancellations.

Then Epic CEO Sweeney jumped into the crossfire, explicitly giving Fortnite players the green light to discuss politics. The game maker is 40% owned by Tencent, but Sweeney is the controlling shareholder.

His statement earned accolades in the U.S., but was shunned in China. “Tencent why are you not holding your dog on a leash? They are biting you in your face,” one person wrote on Weibo. Tencent spokeswoman Jane Yip didn’t respond to a request for comment.

With its investments in Epic and Blizzard, Tencent has its brand on the line -- but little control.

“Never have we seen this policing of China companies being extended to subsidiaries,” said Norris. “And that’s what Tencent is having to grapple with.”

Over the years, Tencent and Alibaba have worked hard to remain on the good side of Beijing, with Tencent recently launching a patriotic game called Homeland Dream in time for the People’s Republic of China’s 70th anniversary celebrations. Both have also been called out by name in Senator Marco Rubio’s letter to President Trump as examples of how Chinese companies are used as tools to help “coerce American companies and American citizens to bend to Beijing’s will.”

With its growing exposure to international markets and regulation, Tencent finds itself in the middle of a maelstrom of political, economic and cultural grievances. Eight Chinese companies -- two of which are backed by Alibaba -- were this week placed on a U.S. blacklist for allegedly being involved in human rights abuses of a Muslim minority in China’s Xinjiang region. That follows the Washington government’s discussion about whether to restrict pension fund investments into China.

Tencent and the rest of China’s technology companies now have to consider risks they’ve never faced before.

“They’re realizing they may not have as many friends as they thought they had across the Pacific,” said Tanner of China Skinny.

To contact the editors responsible for this story: Edwin Chan at echan273@bloomberg.net, Vlad Savov, Peter Elstrom