Tencent Holdings Ltd. pledged to sharply increase investments this year after posting a 25 per cent gain in quarterly revenue, aiming to fend off ByteDance Ltd. and sustain its pandemic-era boom in gaming and cloud.

China’s three largest tech corporations are vying to entice users in the fast-growing arenas of online grocery and video. Tencent said Thursday it plans to invest a larger portion of its incremental profits this year in areas including cloud services, games and shortform video content, joining Alibaba Group Holding Ltd. and Meituan in pledging to boost spending. Tencent is trying to sustain growth in revenue, which climbed to 135.3 billion yuan (US$21 billion) in the three months ended March, roughly in line with analyst estimates.

The results affirmed the resilience of the world’s largest game publishing business as the pandemic recedes. Tencent has shed roughly US$200 billion in market value since its January peak, part of a broader Chinese tech selloff. But Pony Ma’s company has largely escaped Beijing’s antitrust crackdown for now -- despite its ubiquitous WeChat app offering unrivaled insights into all aspects of Chinese life and a commanding lead in gaming, music and social media markets.

“Tencent’s plan to increase investments in 2021 could dampen margins, and is likely undertaken in part to address increasing competition in areas like cloud computing, online games and short videos, where industry peers have been spending aggressively,” said Bloomberg Intelligence senior analyst Vey-Sern Ling.

Investors haven’t fully dismissed the potential fallout for Tencent’s online juggernaut. Rivals like ByteDance argue WeChat is locking users inside its ecosystem by blocking links to external services. Portfolio startups like Yuanfudao and Shixianghui have been penalized for unfair price tactics and other anti-competitive behaviors. Its music spinoff faces heightened scrutiny over exclusive dealings with record labels. And Tencent’s fintech arm -- the closest analog to Jack Ma’s Ant Group Co. in China -- is said to be the next in line for increased supervision.

Executives have sought to assuage investor concerns, saying Tencent has always been cautious with fintech regulations and will stick with its normal practice of acquiring minority stakes in startups. Compliance is the company’s “lifeline,” President Martin Lau reiterated to investors during Tencent’s annual general meeting on Thursday, according to one attendee. 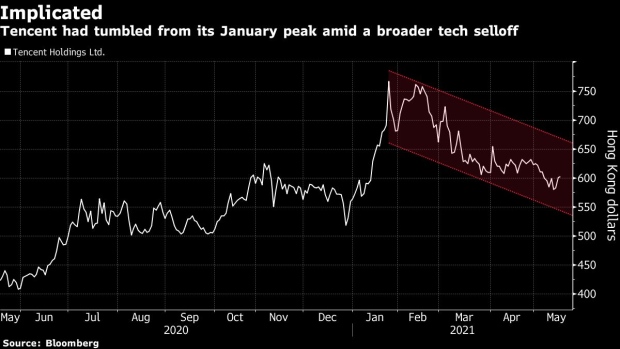 Shares of Naspers and its unit Prosus, Tencent’s largest shareholders, rose more than three per cent after Tencent’s earnings. 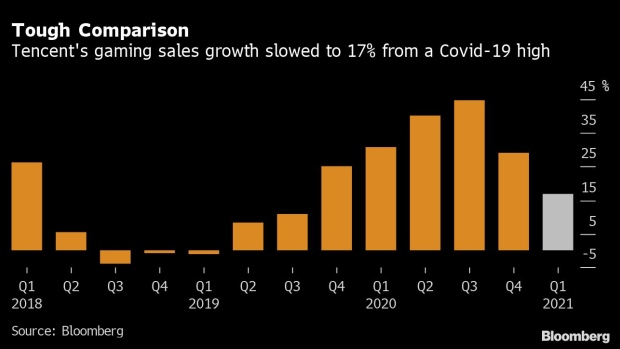 The giant announced a pipeline of more than 40 new mobile and PC titles during its annual game showcase Sunday, including those adapted from familiar content like Japanese manga series One Piece and Digimon. Last month the Shenzhen-based company folded its mini-video app, video streaming platform and mobile store into a single business unit, in a bid to pull together resources to build a Marvel-like franchise.

As part of its increased spending this year, the company will step up investments in game development and also provide production and monetization tools to content creators as part of efforts to grow its short-form video content.

Its fintech and cloud division posted its strongest growth ever, with sales surging 47 per cent as demand for financial services rebounded and as projects delayed by the pandemic resumed deployment. To support the growth of its cloud business, Tencent said Thursday it will boost spending in areas such as headcount and infrastructure. 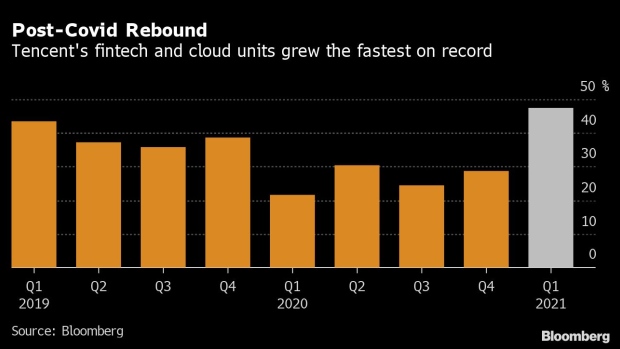 Online advertising revenue climbed 23 per cent, helped by the consolidation of new subsidiary Bitauto and higher demand from the e-commerce, education and the fast-moving consumer goods industries. But the division could take a hit from potential regulatory headwinds in K-12 education as well as delays to its video releases, according to Tencent.

“Possible cautious ad budget spending by apparel brands and online education providers plus uncertainty on broadcasting timing for certain variety shows and dramas could weigh on” ad revenue growth into the second quarter and second half, Citigroup analysts led by Alicia Yap wrote in a note last month.