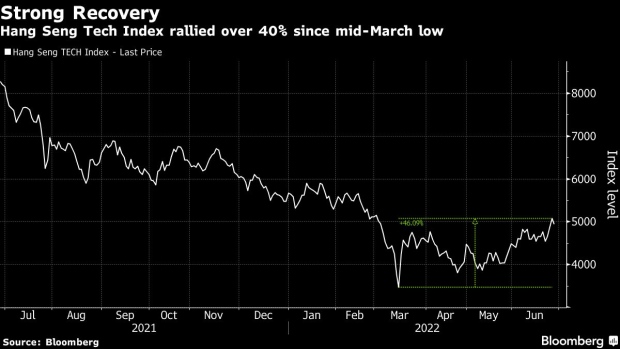 The Hang Seng Tech Index slid as much as 2.9%, most since June 22. Tencent dropped as much as 5.8%, the most in nearly six weeks, after Prosus NV on Monday said it intends to sell more of the mobile gaming giant’s stake. JD.Com Inc. and Bilbili Inc. were also among the biggest decliners on Tuesday.

“Tencent’s big shareholder sale is definitely hurting the whole market sentiment,” said Banny Lam, head of research at CEB International Investment Corp. “The tech stocks have had a good rally, so it’s not surprising for us to see people taking profit or rotating among sectors.”

The Hang Seng tech gauge has rebounded 43% since a record low in mid-March, as investors have rotated back into the sector on bets that the worst of Beijing’s crackdowns -- which triggered a year of heavy selling and dragged valuation multiples to record low levels -- is over.

Companies including Alibaba Group Holding Ltd. and Bilbili have seen their shares approach or enter the technical overbought zones this month, data compiled by Bloomberg show.