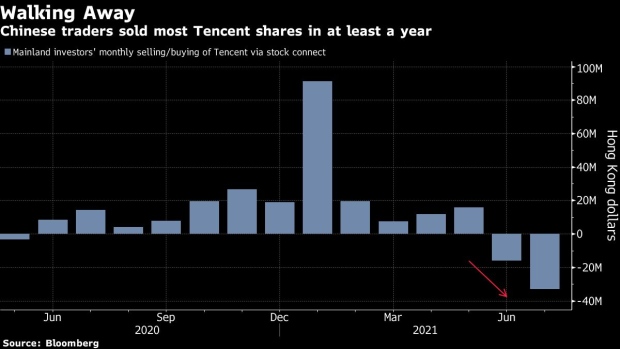 A pedestrian uses a smartphone while walking along a footbridge in the Lujiazui business district in Shanghai, China, on Tuesday, July 20, 2021. Banks in China kept the benchmark loan rate unchanged, indicating that the central bank is continuing to keep policy stable despite a recent surprise move to add liquidity to the financial system. Photographer: Qilai Shen/Bloomberg , Bloomberg

(Bloomberg) -- Chinese investors are turning against the nation’s technology giants, removing a pillar of support that helped the sector through previous market routs.

Mainlanders have sold a net HK$33 billion ($4.2 billion) worth of Tencent Holdings Ltd. shares in July in what is likely to be the biggest monthly outflow in at least a year, Bloomberg calculations show. Their stake in the company has fallen to the lowest since February, the data show. They have also sold a net HK$13 billion of Meituan shares this month, cutting holdings to the lowest since May.

The bearish turn from mainland investors is in contrast to February and March, when they continued buying Tencent stock as it fell. Cheaper valuations kept drawing them in, even as foreign investors bailed out to escape the impact of Beijing’s tougher stance toward digital finance businesses and anti-trust violators.

“The extent and harshness of Beijing’s crackdown have surprised many people,” said Dai Ming, a Shanghai-based fund manager at Huichen Asset Management. “It’s far beyond ‘normal regulation’, a scenario that many of us once priced in. Anything that threatens China’s data security will be heavily punished.”

Meituan and Tencent, together with Alibaba Group Holding Ltd., accounted for more than a half of the Hang Seng Index’s losses over Monday and Tuesday, when the gauge slumped 8.2% in its biggest two-day drop since the 2008 financial crisis.

Meituan lost a record 29% in the past two days, while Tencent tanked 16%.