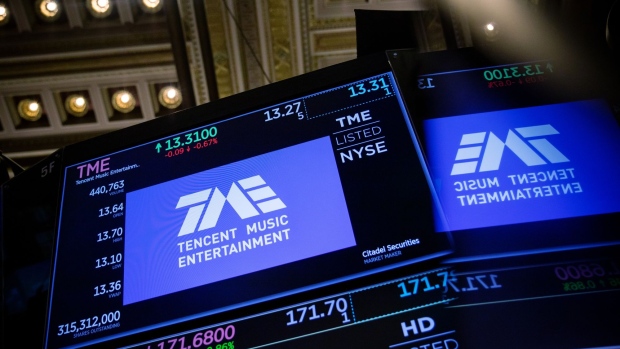 A monitor displays Tencent Music Entertainment Group signage on the floor of the New York Stock Exchange (NYSE) in New York, U.S., on Monday, Dec. 31, 2018. U.S. stocks erased gains in thin trading on the final day of what is shaping up to be the worst year since the financial crisis. , Bloomberg

(Bloomberg) -- Tencent Music Entertainment Group is pressing ahead with its Hong Kong listing plans with a goal to start trading in the Asian financial hub as soon as next week, according to people familiar with the matter.

The Shenzhen-based company, whose shares already trade in New York, is working with advisers on the preparations for its second listing, the people said. Marketing activities could start as early as in the coming days, said the people, who asked not to be identified as the information is private.

Deliberations are ongoing and details of the listing including timeline could still change, the people said. A representative for Tencent Music didn’t immediately respond to requests for comment.

Tencent Music in March said it plans to pursue a secondary listing in Hong Kong, joining a flurry of Chinese firms seeking alternative listing as escalating Sino-US tensions fuel delisting risks. The listing in the Asian financial hub would be by way of introduction, meaning it won’t sell new shares or raise money.

Tencent Music raised about $1.07 billion in a US initial public offering in 2018. Shares of Tencent Music have tumbled by about 31% this year, giving it a market value of about $8 billion.