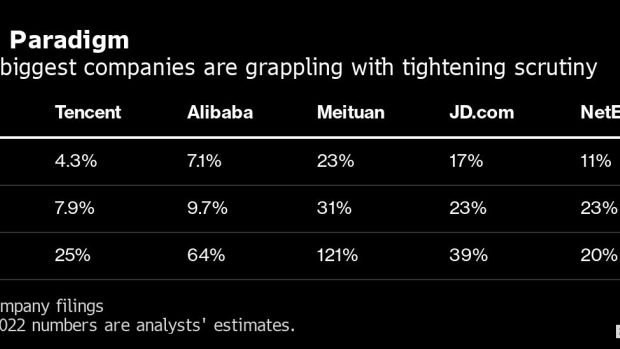 Revenue came in at 135.5 billion yuan ($20.1 billion) for the three months ended March, versus the 141.1 billion yuan average forecast. Growth decelerated for a seventh straight quarter, to the slowest pace since the Shenzhen company went public in 2004. Net income slid 51% to 23.4 billion yuan, compared with the 29.3 billion yuan projected.

China’s largest tech corporations from Tencent to Alibaba Group Holding Ltd. are resigning themselves to a new era of cautious expansion, more than a year after the start of Beijing’s campaign that eventually engulfed every internet sphere from e-commerce to gaming and fintech. Sentiment toward the industry has swung wildly in recent weeks, as investors debate whether the crackdown has run its course, or is at least switching to a more sustainable pace.

Tencent has so far largely escaped direct scrutiny from Beijing, but not fallout from the broader clampdown and economic malaise. It’s shed roughly $500 billion of market value since its 2021 peak, even as the company studiously endorses Beijing’s efforts to curb excesses in its once free-wheeling internet sector.

On Tuesday, Chinese economy czar Liu He vowed support for digital platform companies and their public listings, after a symposium attended by firms including Baidu Inc. and NetEase Inc.

“On the one hand, our revenue and profit growth has slowed down; on the other hand, we can use it as a chance to shift gear toward higher-quality development,” founder Pony Ma wrote in Tencent’s social value report published this week, calling it the “difficult but right thing” to do.

Online advertising sales have been battered by China’s weakening economy and competition against TikTok-owner ByteDance Ltd., while Covid lockdowns in cities like Shanghai and Beijing delayed cloud projects and cooled transactions. Its bread-and-butter gaming division -- the world’s largest -- is still on the waitlist for new monetization licenses, after regulators last month approved the first batch of domestic releases since July.

Given the new realities, executives said in March that international games, cloud software, and WeChat’s video accounts will be their major strategic foci.

For now, the WeChat messaging app is still the payment and smartphone backbone of Tencent’s sprawling online empire, and it’s only going to shoulder a bigger role for money-making to try and offset struggling businesses like streaming and domestic games. In April, Tencent shut down its game streaming platform and hiked fees for its Netflix-style service for the second time in about a year, as short-video rivals keep luring away users and marketers.

Just like Mark Zuckerberg’s Meta Platforms Inc., Tencent is taking a leap into the virtual realm of the metaverse in the longer term. The Chinese company has revamped its aging social app QQ with customizable 3D avatars and Unreal Engine graphics, and is hiring developers to make open-world titles. But such endeavors, along with a steady pace of investment in overseas game studios, could pressure margins before they come to fruition.

“We expect Tencent’s earnings weakness to continue well into 1H2022E due to slowdown in online games and online advertising businesses,” Shifara Samsudeen, an analyst with LightStream Research, wrote in a note on Smartkarma before the results. “At this point, we don’t see many catalysts to drive a strong rally in Tencent’s share price.”