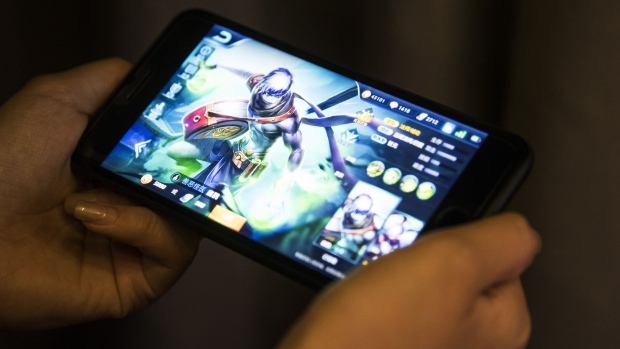 An avatar is displayed in an arranged photograph of the Honour of Kings mobile game, developed by Tencent Holdings Ltd., in Hong Kong, China, on Friday, Aug. 18, 2017. The mobile smash, where professional doppelgangers get paid to help newbies climb both social and gaming ladders, is expected to generate as much as $3 billion in revenue this year. , Bloomberg

(Bloomberg) -- Tencent Holdings Ltd.’s revenue grew a faster than expected 29% after it expanded the world’s largest online gaming empire in defiance of an economic downturn.

China’s biggest social media company has benefited from an internet resurgence during Covid-19 but is grappling with economic malaise as well as a U.S. WeChat ban with potentially far-ranging impact. Tencent executives will seek to reassure the market it can withstand a White House campaign that’s already ensnared Huawei Technologies Co. and dozens of Chinese up-and-comers, in part by focusing on its core home market.

It won approval from Beijing to earn from Call of Duty Mobile, the smartphone version of a long-running franchise that will underpin its gaming business, and has charted a line-up of new titles for 2020 to shore up resilient franchises Peacekeeper Elite and Honor of Kings. It’s driving discussions to merge U.S.-listed Huya Inc. and DouYu International Holdings Ltd. to create a Twitch-like $10 billion local leader in games streaming.

One risk to its outlook was the surprise delay of Mobile Dungeon&Fighter, though analysts expect eventual approval for a Nexon Co. title that’s supposed to be Tencent’s tent-pole for the second half.

“2020 will be a big year for Tencent games,” China Merchants Securities analyst Leo Liu said. But there’s “concern about the delay of Dungeon and Fighter because it’s Tencent’s gaming blockbuster and masterpiece, which may affect performance ahead.”

China’s No. 2 company had gone on a tear, gaining more than $280 billion of market capitalization since a March trough, before U.S. President Donald Trump signed an executive order to label WeChat a national security risk. It’s unclear how the White House will define that ban, but the sweeping language of the order -- which would bar “transactions” with the Chinese company from September -- leaves the door open for the administration to extend it well beyond WeChat.

Read more: Why Tencent and WeChat Are Such a Big Deal in China: QuickTake