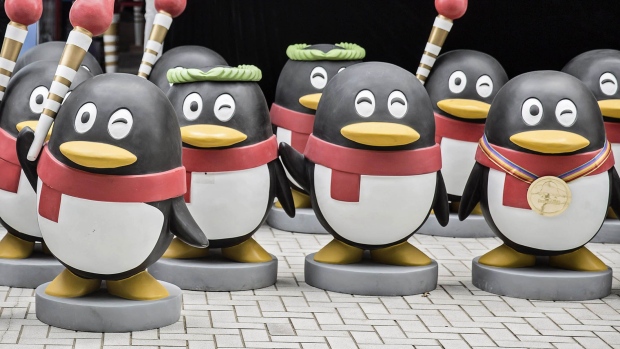 A man stands next to statues of the QQ mascot outside Tencent Holdings Ltd.'s under construction new headquarters in Shenzhen, China, on Monday, Aug. 22, 2016. The new headquarters for Tencent is a $599 million project aimed at creating a campus-like atmosphere for the urban setting. Scheduled for completion next year, the Shenzhen skyscraper could become one of the largest labs for new internet services and connected devices. , Bloomberg

(Bloomberg) -- Tencent Holdings Ltd. dived as much as 9.3% Tuesday as nervous investors continue to reevaluate their holdings in the wake of Beijing’s broad crackdown on Chinese internet giants.

The gaming and social media giant, an investor in firms like Meituan and Didi Global Inc. that had been caught up in a wave of recent selling, extended a 14% loss from last week. Some investors have speculated that Beijing might set its sights on the gaming sector after coming down hard on adjacent online industries from e-commerce to ride-hailing. Other gaming stocks, including Netease Inc. and XD Inc., also dropped Tuesday.