Tencent Holdings Ltd. led a stocks rout after Chinese state media decried the “spiritual opium” of games, prompting the company to broach a ban for kids and triggering fears Beijing will set its sights next on the world’s largest gaming arena.

China’s most valuable corporation fell as much as 11 per cent after an outlet run by the Xinhua News Agency published a blistering critique of their industry. The Economic Information Daily cited a student as saying some schoolmates played Tencent’s Honor of Kings -- one of its most popular titles -- eight hours a day and called for stricter controls over time spent. The online link to the post was removed hours later without explanation -- then restored to the paper’s website late in the day but with narcotics references stripped out.

Tencent then followed up with a pledge to further limit play time for minors -- to just an hour during weekdays and no more than two hours during vacations and holidays. That’s a step up from restrictions imposed by China’s gaming watchdog in 2019. It also plans to forbid in-game purchases for under 12-year-olds, starting with its signature title. And more dramatically, the company broached the possibility of the industry banning games altogether for those under the age of 12, without elaborating.

Tuesday’s rapid-fire developments stoked fears Beijing will next train its attention on an arena that’s pivotal to the bottom line of media giants from Tencent to Apple Inc. and Activision Blizzard Inc. They come after a couple of tumultuous weeks for global investors that at one point wiped out more than US$1 trillion of market value. Since July, the government has effectively frozen overseas listings to safeguard data security in the wake of Didi Global Inc.’s controversial US$4.4 billion IPO, and ordered a swath of after-school tutoring businesses to go non-profit. Those actions demonstrated Beijing’s resolve to go after private enterprises to address social inequities, seize control of data it deems crucial to the economy and stability, and rein in powerful interests.

“China, in this regard, is in uncharted waters and needs to tread the path carefully,” said Aidan Yao, Senior Emerging Asia Economist of AXA Investment Managers. “A lot of the recent market volatility is, in my view, a result of investors not knowing what Beijing is up to, that inadvertently erodes confidence in investing in this market. The latter is a key risk that needs to be carefully managed.” 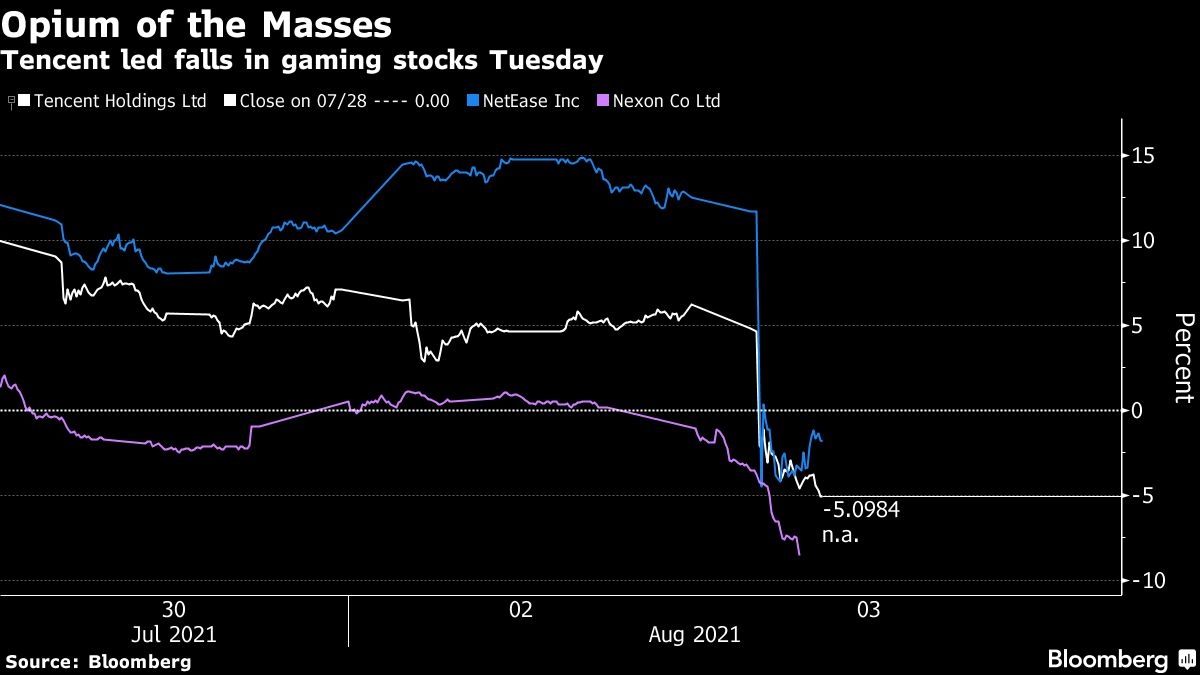 Tencent recouped some of its losses to end 6 per cent lower. Shares in Tencent backers Naspers Ltd. and Prosus NV slid, while Nintendo Co. and Capcom Co. fell alongside Nexon Co. in Tokyo. Many foreign game developers have a licensing deal with Tencent to get their titles into China.

Beijing’s campaign to rein in its giant internet industry is entering its 10th month, a roller-coaster ordeal that’s prompting nervous investors to ponder the longer-term ramifications of a crackdown on firms from Jack Ma’s Ant Group Co. and Alibaba Group Holding Ltd. to Tencent-backed food delivery giant Meituan and Didi. Tencent has now shed about US$400 billion of its market value since a January peak.

“The word choice of spiritual opium is especially harsh, it would be surprising if the regulators won’t do anything about this,” said Ke Yan, a Singapore-based analyst with DZT Research.

China’s social media leader has run afoul of regulators in the past, most notably in 2018 when watchdog agencies clamped down on gaming addiction and temporarily suspended monetization licenses, walloping Tencent’s main business. Terms likening games to narcotics have in fact been employed in Chinese media in the past to call attention to the prevalence of gaming among youths, tracing back to the era of PC gaming in cybercafes.

In response, Tencent has restricted playing time for minors and imposed other measures to try and curb addiction. Just last month, it installed facial recognition systems for certain games to prevent kids from using their parents’ IDs to buy in-game items. In the fourth quarter of 2020, minors aged under 18 accounted for just 6 per cent of the company’s Chinese online gaming gross receipts.

“No industry or sport should prosper by eradicating an entire generation,” Tuesday’s article said, citing an academic at a state-backed institution.

Tencent and NetEase’s efforts over the last three years to reduce the play-time of younger gamers and enhance content controls may insulate them from another round of regulatory scrutiny on China’s online game sector, in our view. Yet they may have higher near-term costs on a possible need to accelerate the rollout of ID checks and other systems in games to prevent younger players from accessing inappropriate content.

It’s unclear whether regulators now intend to re-focus on the gaming sector, or other parts of Tencent’s vast media and entertainment empire. On July 27, Tencent said it was suspending new user registrations for its WeChat messaging super-app, prompting concerns about Beijing’s intentions for the industry leader.

Investors fled Tencent and its internet peers in recent weeks after China announced its toughest-ever curbs on the online education industry and issued a series of other edicts governing illegal online activity and food delivery. Xi Jinping’s government has in past months embarked on a series of crackdowns on the country’s most influential private-sector companies over issues ranging from antitrust to data security, as it seeks to rein in tech giants’ influence.

“The market is on a razor’s edge,” said Chen Yicong, managing director at Beijing Chengyang Asset Management Ltd. “I think this will only bring more of a technical adjustment to the way things are done, rather than bring in a new risk factor that has not been already priced in.”