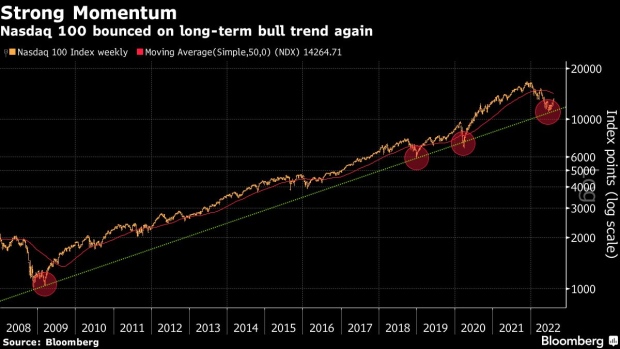 (Bloomberg) -- Just 18 months ago, Tencent Holdings Ltd. was on the cusp of becoming Asia’s second trillion-dollar company, as Chinese internet giants carried the fight for dominance to their US rivals.

But a more than $560 billion market value wipeout later and with shares slumping to a near four-year low, investor hopes for a smooth recovery are on their last legs.

Next week, Tencent will seek to assure investors about its outlook during second-quarter results. They won’t be easy to convince. The company is set to report its first quarterly revenue decline since the 2008 financial crisis, weighed down by a slowdown in gaming sales. A lack of clarity over Beijing’s crackdown is weighing on sentiment as well.

“We need earnings recovery. But we do not see that yet,” said Paul Pong, managing director at a Hong Kong-based Pegasus Fund Managers Ltd., who holds shares. “The biggest problem for Tencent, like many of its peers, is that growth has almost stalled.”

Since Tencent’s stock touched an intraday record in February 2021, it’s tumbled nearly 60% and has lost more value than any other stock globally, according to Bloomberg data. Alibaba Group Holding Ltd., which has seen shares sink 65% in that time, ranks second in terms of the biggest losses at $495 billion.

The woes plaguing Chinese tech firms are familiar ones. Beijing’s year-long sweeping crackdown has forced a reckoning on the once-mighty sector, burning global funds and causing some analysts to downgrade the sector. And now, news that a slew of Chinese firms are delisting from US exchanges also is weighing on sentiment -- mainland tech stocks slipped in pre-market trading in New York.

In late June, e-commerce firm Prosus NV -- whose parent was an early Tencent investor more than two decades ago -- became the latest high-profile backer to pare its stake. The shares dropped despite Tencent buying back HK$3.6 billion ($459 million) of its own stock since then.

Part of the problem is that Tencent hasn’t yet received regulatory approval for new video game licenses even as peers get the go-ahead. Player spending on its wildly popular Honor of Kings mobile game has declined for three consecutive months since May, according to data from SensorTower. Covid-linked lockdowns are hurting profits and media reports about layoffs are causing concern.

“The market is pricing in no new game approval for Tencent this year, a double-digit decline in advertising revenue and struggling cloud businesses,” Julia Pan, Shanghai-based analyst at UOB Kay Hian.

Pan, who said that the Prosus sales will cap Tencent’s valuation, expects the firm to cut more jobs in non-core areas to boost margins.

Whether that’s enough for a turnaround is another question. Even as authorities pledge to reverse course and support the tech sector, a number of geopolitical and economic concerns loom, including fears about a global recession and China’s strict adherence to Covid Zero dampening ad revenues.

“Unfortunately we will see more consolidation and layoffs in the Chinese technology sector. Even if the regulatory tightening may ease gradually, the macro environment is challenging,” Pegasus’s Pong said.

The Nasdaq 100 Index has bounced once again, in line with its long-term bull trend that’s been in place since 2009. The tech-heavy benchmark is now up more than 20% from its June low, having entered a technical bull market, and is on course toward its 50-week moving average, which sits just above the 14,000 level. Falling bond yields and lower-than-expected US inflation have fueled a rally in growth stocks after a tough first half of the year, with investors anticipating the Federal Reserve will be less hawkish from here. The tech-heavy index was higher on Friday, on course for its fourth consecutive week of gains.