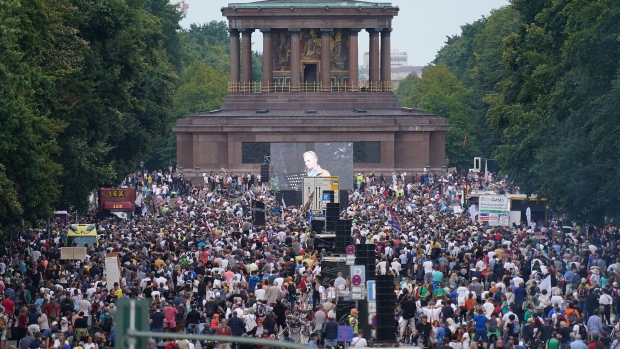 BERLIN, GERMANY - AUGUST 29: People gather at the Victory Column in the city center to hear speeches during a protest against coronavirus-related restrictions and government policy on August 29, 2020 in Berlin, Germany. Tens of thousands of people from a wide spectrum, including coronavirus skeptics, conspiracy enthusiasts, hippies, right-wing extremists, religious conservatives and others converged on Berlin to attend the protests. City authorities had banned the protests, citing the flouting of social distancing by participants in a similar march that drew at least 17,000 people a few weeks ago, but a court overturned the ban. (Photo by Sean Gallup/Getty Images) , Photographer: Sean Gallup/Getty Images Europe

(Bloomberg) -- Tens of thousands of people took to the streets of Berlin to protest against government restrictions in what may be the largest demonstration to date against efforts to contain the pandemic.

About 18,000 people attended a march in the center of the German capital on Saturday morning and tens of thousands turned out for an afternoon rally, according to police. The demonstrations were primarily peaceful, though some police officers were attacked and several people arrested.

Police ordered demonstrators to break up the march after many participants refused to wear a mask or respect social-distancing rules, police spokeswoman Anja Dierschke said. Some demonstrators threw bottles at officers near the Brandenburg Gate, she said.

One protest leader at the bigger rally called for pandemic-related laws to be lifted and on Chancellor Angela Merkel’s government to resign, public broadcaster ARD reported. Demonstrators held posters that read “Stop the coronavirus madness” and “End the coronavirus dictatorship.”

The Berlin rally was organized by a group called Querdenken 711, which says the virus restrictions infringe on German constitutional freedoms. The protests attracted a mix of libertarians, virus deniers, right-wing extremists and anti-vaccine campaigners.

Cases have been ticking up in Germany with new infections hovering near four-month highs, raising the prospect of a return to stricter lockdown measures.

Merkel warned on Friday that the coronavirus crisis will get worse before it gets better as the summer draws to a close and people are forced indoors. She has also called on Germans to refrain from non-essential travel to areas with severe coronavirus outbreaks, and regional authorities agreed to impose a 50-euro ($59) fine for not wearing masks when necessary.