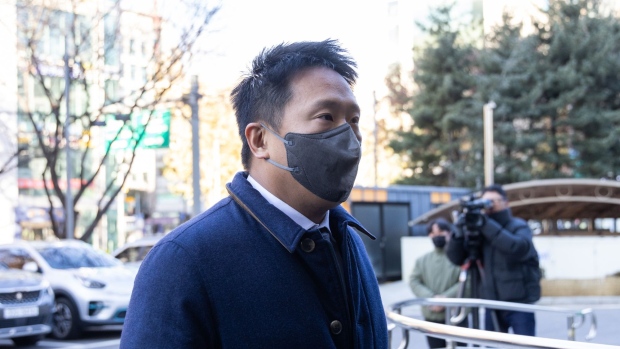 Daniel Shin, co-founder of Terraform Labs, arrives at the Seoul Southern District Court in Seoul, South Korea, on Friday, Dec. 2, 2022. South Korean prosecutors are seeking the arrest of Shin, stepping up their investigation of a $60 billion cryptocurrency wipeout. , Bloomberg

(Bloomberg) -- A South Korea court dismissed a request from prosecutors for an arrest warrant against Terraform Labs’ co-founder Daniel Shin.

In a ruling on Saturday local time, the Seoul Southern District Court said in a text message that Shin’s behavior during the investigation makes it difficult to believe he poses a flight risk or would destroy evidence. The court also said it dismissed arrest warrants for seven other people involved in the case for the same reason. They include three early investors and four developers of Terra, according to a Yonhap report.

There is need to guarantee the suspect’s right to defend his case against his key allegation related to violating capital market rules, Yonhap also said, citing the court.

“It is hard to understand the court’s decision,” the prosecutors’ office said in a text message following the court results. The court acknowledged the seriousness of the allegations, yet decided to reject the arrest warrants of those who have made undue profits under the pretext of protecting their rights to defend themselves, they said. Prosecutors will review the dismissal and decide whether to file another arrest warrant.

The TerraUSD stablecoin -- which was meant to maintain a 1-to-1 relation with the dollar -- and its sister token Luna collapsed in May. Fallen crypto entrepreneur Do Kwon is the other founder of the Terra ecosystem. His whereabouts became unclear after prosecutors in Seoul sought his arrest. He has denied wrongdoing.

Kwon Ohoon, a lawyer at Cha & Kwon Law Offices in Seoul, said Saturday that it’s “questionable” whether the court will find Do Kwon guilty should the prosecutors charge him on allegations of breaking the nation’s capital markets law. “The prosecutors’ arguments linking the capital markets law violations to the Terra/Luna look weak, and the court seems to have decided that they may not be right,” he said.

The court ruling “illustrates the unfounded nature of the prosecutors’ claims,” said a Terraform Labs spokesperson. “With these allegations behind us, our focus is on building the future of Terra and developing the best ecosystem in web3 to launch and scale a blockchain.”

Shin’s lawyers, in a text message, called the court’s decision a “sound judgment.”

--With assistance from stacy-marie ishmael, Jessica Park and Yueqi Yang.

(Updates from fourth paragraph with comment from the prosecutors office and Shin’s lawyers.)