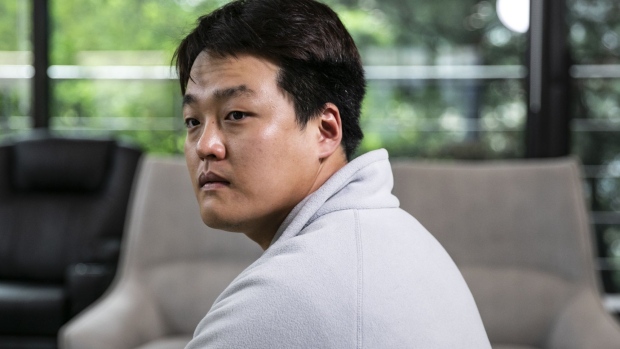 (Bloomberg) -- Do Kwon, whose collapsed Terraform Labs cryptocurrency ecosystem sparked a meltdown in digital assets, may see his work status in Singapore at risk, the Straits Times reported.

Kwon has applied to renew his Employment Pass, which gives him the right to work in Singapore and which expires on Dec. 7, according to the report. Kwon applied for an EntrePass -- which is meant to allow eligible foreign entrepreneurs to start and operate businesses in Singapore -- and was rejected, the Straits Times said, citing Ministry of Manpower records.

The Terra founder faces potential deportation back to South Korea after officials sought to have his passport revoked, according to South Korea’s prosecutor’s office on Thursday. That comes after a court issued arrest warrants for six individuals including Kwon on allegations including the violation of capital-markets law.

MOM has the discretion to reject work application renewals if there is deemed to be a breach of the law. Some expats had their employment passes revoked after they were found guilty of flouting government-imposed lockdowns in 2020.

If there’s a police case or lawsuit against a work-pass holder, or other adverse records like involvement in a scam, MOM takes those factors into consideration when considering the person for renewal of the pass, Regent Law criminal lawyer Rajan Supramaniam told the ST.

MOM and Do Kwon didn’t immediately reply to requests for comment from Bloomberg News on Saturday.