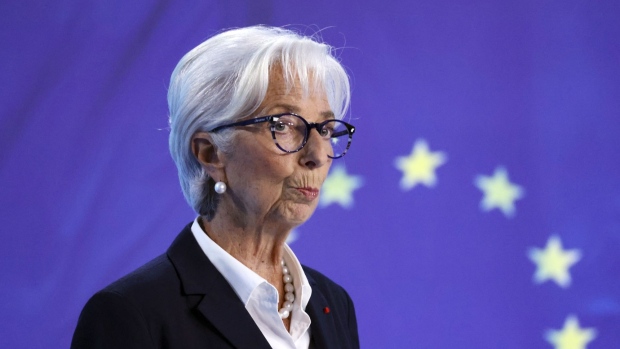 Christine Lagarde, president of the European Central Bank (ECB), during a news conference in Frankfurt, Germany, on Thursday, Oct. 27, 2022. The ECB doubled its key interest rate to the highest level in more than a decade, intensifying its broadside against record inflation in the face of a likely recession. , Bloomberg

(Bloomberg) -- Vladimir Putin is “a terrifying person,” European Central Bank President Christine Lagarde said, referring to her past meetings with the Russian president, though “he was not as sick as he is today.”

“Why would you do things like that, invading a country, having people killed, destroying the fabrics of a society, and failing?” she said in an interview on Irish national broadcaster RTE’s Late Late Show on Friday. “Anyone who is behaving in that way must be driven by evil forces.”

Putin’s attack on Ukraine is his attempt to “cause chaos and to destroy as much of Europe as he can,” she said.

Even so, Putin’s actions have “reunited” the Ukrainian people, she added.  “He has rejuvenated NATO and he has certainly brought the Europeans together.”

After expressing her view, Lagarde stressed that she’s “just a central banker,” so “shouldn’t be saying all these things.”

Explaining the recent actions of the ECB, which on Thursday doubled its key interest rate to the highest in more than a decade, Lagarde said the central bank is “fighting inflation” caused by a speedy recovery after the pandemic plus “the energy crisis caused by Mr. Putin who has decided in an unjustifiable way to invade another country.”

“This energy crisis is causing massive inflation, which we have to defeat,” she said. “That’s why we have to raise interest rates because we want to tame inflation, bring it back to reasonable levels so the cost of living isn’t as high as it is for people.”