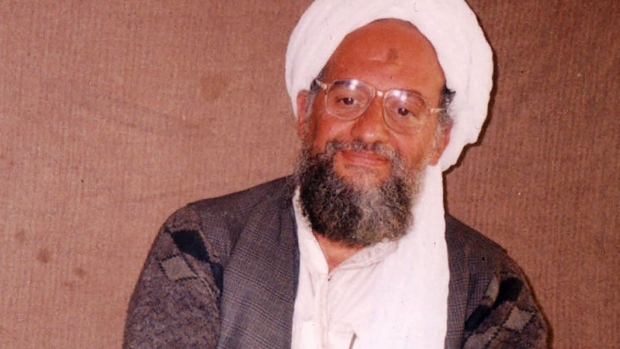 (Bloomberg) -- The Taliban’s apparent sheltering of al-Qaeda leader Ayman al-Zawahiri, who was killed last weekend in a US drone strike in Kabul, dealt a blow to an already politically fraught attempt to free up $3.5 billion in frozen bank funds to alleviate poverty and famine in Afghanistan.

A year after the US withdrew its forces from Afghanistan and the Taliban seized control, the South Asian country faces dire circumstances. Before President Joe Biden said this week that the Taliban had let Zawahari live quietly in the heart of Afghanistan’s capital, US officials were working on a complicated plan to distribute half of almost $7 billion in frozen Afghan central bank assets for humanitarian aid.

“Placing UN, EU, and US-designated terrorists in senior positions at the Afghan central bank and harboring al-Qaeda leaders in downtown Kabul demonstrates the Taliban’s profound inability to be a responsible international stakeholder,” said Alex Zerden, a former US Treasury official who led its office in Kabul during the Trump administration.

The most recent efforts to free up aid included a meeting last month among US State and Treasury Department officials, senior representatives of the Taliban and what the US described as “technocratic professionals” in Tashkent, Uzbekistan. At the center of the discussions was a thorny issue: How to get the money to the people of Afghanistan without it falling into the hands of the Taliban.

At the conclusion of the meeting, which involved Special Representative for Afghanistan Thomas West and Under Secretary of the Treasury for Terrorism and Financial Intelligence Brian Nelson, the US issued a terse statement citing “the need to address the urgent humanitarian situation in Afghanistan” and do it quickly.

“The two sides discussed ongoing efforts to enable the $3.5 billion in licensed Afghan central bank reserves to be used for the benefit of the Afghan people,” the State Department said. “The United States underscored the need to accelerate the work on these efforts.”

Anthony Cordesman, emeritus chair in strategy at the Center for Strategic and International Studies  in Washington, warned against focusing on the killing of Zawahiri to the exclusion of the “much more serious problems” of widespread poverty and hunger facing Afghanistan.

The Afghan money was frozen after the US withdrew from Afghanistan, precipitating a takeover of the country by the Taliban following a 20-year effort that fell short of goals that included maintaining a more Western-friendly government.

The US was forced to negotiate with the Taliban in order to evacuate its military, citizens and permanent residents as well as some of the many Afghan nationals who had worked for American officials and agencies. During the frenzied operation, 13 US service members were killed in an attack claimed by ISIS-K, an offshoot of Islamic State based in Afghanistan and Pakistan.

As part of the withdrawal, the US froze almost $9.5 billion in assets belonging to Da Afghan Bank, the nation’s central bank. The bulk of the funds are in accounts with the New York Federal Reserve and US-based financial institutions.

Earlier: ‘The Taliban Are Knocking’: Afghan Allies of US Fear Worst

In February, Biden issued an executive order consolidating the $7 billion held by US institutions and dividing it into two sections, the ultimate fate of both to be determined by a US federal judge overseeing the assets. Half of the money is attached to a case involving the families of victims of the 9/11 attacks and half is set aside for “the benefit of the Afghan people.”

Biden’s executive order is “designed to provide a path for the funds to reach the people of Afghanistan, while keeping them out of the hands of the Taliban and malicious actors,” according to the order.

But trying to funnel funds through independent or multilateral organizations is no guarantee of success, Cordesman said in an interview. “We had outside international bodies all through the existence of the previous Afghan government,” he said. “And none of them prevented that from being one of the most incompetent and corrupt governments in the world.”

The White House statement acknowledged that even with the $3.5 billion in returned funds, Afghanistan faces severe economic head winds, including poverty rates above 50%, a multiyear drought and an underdeveloped financial system plague by corruption. The United Nations estimates that there are 2.6 million Afghan refugees worldwide and more than 5.5 million people displaced by conflict inside the country.  The International Monetary Fund foresees a 30% contraction in the country’s economy.