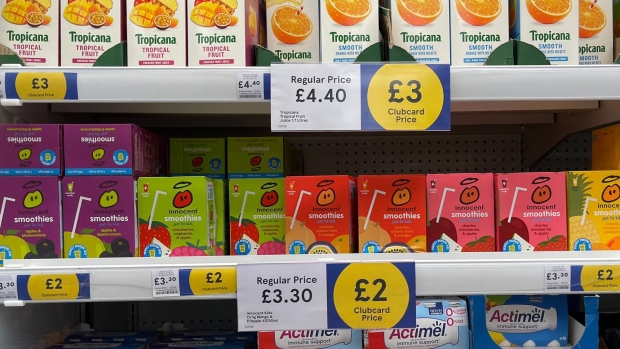 NORTHWICH, ENGLAND - JULY 06: Orange juice and smoothies sit on display in a Tesco supermarket on July 06, 2022 in Northwich, England. The British Retail Consortium recently said food manufacturers and supermarkets are having to pass on some of the cost of soaring raw materials to consumers, leading to the price of basic goods throughout the UK rising at the fastest pace since September 2008. Fresh food prices increased by 6% in the year to June 2022 coupled with an increase in inflation, and fuel and energy prices to create a cost of living crisis. This is leading to millions of low-income households going without essentials items, falling behind on bills and taking on debt. (Photo by Christopher Furlong/Getty Images) , Photographer: Christopher Furlong/Getty Images Europe

Tesco Plc froze prices on 1,000 products until next year to maintain its leading market share in the UK amid intense competition from discount grocers Aldi and Lidl.

Britain’s biggest grocer reported better-than-expected sales and only slightly reduced its profit guidance for the fiscal year as it works to keep prices low and increases pay to blunt the impact of inflation on consumers and employees. The stock declined as much as 3.1% in London.

Tesco is fighting to keep shopper loyalty as consumers in the UK decamp to cheaper rivals. The highest inflation in four decades and rising energy bills are piling pressure on consumers to save money on food.

“We are on track despite a tough environment,” Chief Executive Officer Ken Murphy said on a call. “Customers are increasingly concerned about household spending and are watching every penny to make ends meet.”

Tesco already matches prices with Aldi across hundreds of basic items that range from teabags to bananas to try to avoid losing customers to the discounter.

The grocer said its hourly workers will receive an extra 20 pence an hour, taking the base rate of pay to £10.30 ($11.78) an hour to help ease the cost-of-living crisis for its staff. The grocer also raised its dividend.

Tesco now expects retail adjusted operating profit will be between £2.4 billion and £2.5 billion this year, lowering the upper range from £2.6 billion.

Rival Morrisons reported a 50% slump in adjusted earnings for the third quarter last week. Even Aldi, which is winning customers and growing its market share, has seen pretax profit slide more than 85% from the year before.

More shoppers are switching to store brands, buying smaller amounts of groceries and purchasing more frozen goods rather than fresh, according to Murphy.

“Our plan is to be able to take away the worry that you’re paying more in our shops for all those essentials you can find in a limited-range discounter, but also make sure you can get everything else you need,” the CEO said.

Tesco also said it’s trying to deliver its three-year savings goal 12 months early and reach £1 billion of savings by February 2024. As part of this, the company already cut 1,600 jobs earlier this year by revamping how its stores operate overnight and shutting its discount chain Jack’s.

Tesco, which also owns wholesaler Booker, has a 27% share of the UK grocery market and employs more than 360,000 people. The pay increase for UK staff comes on top of a raise earlier in the year as inflation saps purchasing power. The grocer is providing extra support to help employees with an extended discount allowance, more access to working hours and free food in staff rooms.

The company’s shares have lost about a quarter of their value this year.