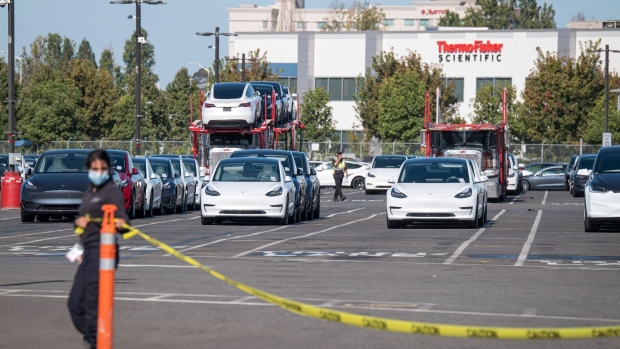 A security guard wearing a protective mask puts up a caution tape at the entrance to the vehicle holding lot outside the Tesla Inc. assembly plant in Fremont, California, U.S., on Tuesday, Sept. 22, 2020. , Bloomberg

Tesla Inc. is warning workers at its auto plant in Fremont, California, that an employee allegedly “maliciously sabotaged” part of a factory last month and was fired after an internal investigation, according to a memo seen by Bloomberg News.

The electric-car manufacturer responded to the incident rapidly, and operations at the facility were disrupted for only a short period, according to an email sent Monday by Al Prescott, Tesla’s vice president of legal and acting general counsel.

“Two weeks ago, our IT and InfoSec teams determined than [sic] an employee had maliciously sabotaged a part of the Factory,” Prescott wrote in the email. “Their quick actions prevented further damage and production was running smoothly again a few hours later.”

More than 10,000 people work at Tesla’s auto plant in Fremont, where the company makes the S, X, 3 and Y models. It was not immediately clear if Tesla handled the incident internally or reached out to law-enforcement agencies for assistance. A spokeswoman for the Fremont Police Department said Tuesday that they have not responded to any incident that matches these circumstances. The San Francisco office of the Federal Bureau of Investigation did not immediately respond to a request for comment.

The employee, who was not named, allegedly sought to “cover up his tracks,” blame a co-worker and destroy a company computer, the email said. “Ultimately, after being shown the irrefutable evidence, the employee confessed. As a result, we terminated employment.”

Tesla is no stranger to concerns of sabotage and has a robust internal-security team. Last month, Chief Executive Officer Elon Musk confirmed that Tesla’s factory in Nevada was the target of a thwarted cyberattack by a Russian national.

In 2018, Musk warned in an internal email that someone was trying to sabotage the company. That someone, Musk would later claim, was Martin Tripp, a former employee who has been embroiled in litigation with the company ever since. Not all of Tesla’s claims have proved accurate: The company alleged Tripp was going to shoot up the Nevada factory, but police quickly determined that he was not a threat.

In 2016, Tesla sued a former oil-services executive for impersonating Musk in an email to former CFO Jason Wheeler. In the lawsuit, the carmaker said the email was part of an oil-industry effort to undermine Tesla’s push for energy-efficient transportation.

The company said in the email Monday that it does not tolerate unethical behavior and will take steps against workers who engage in such acts.

“We place tremendous trust in our employees and value everyone’s contribution. However, whatever the personal motivations of the attacker were, these are crimes, violations of our code of conduct, and are unfair to other employees,” Prescott wrote. “We will take aggressive action to defend the company and our people.”

Prescott, Musk and Tesla did not respond to requests for comment.