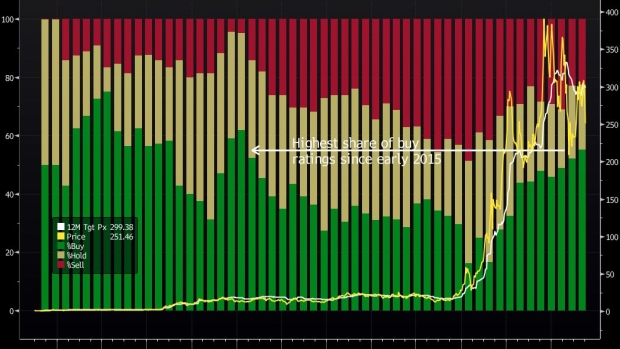 Electric automobiles are displayed inside a Tesla Inc. store in Barcelona in 2019. Photographer: Angel Garcia/Bloomberg , Bloomberg

(Bloomberg) -- Tesla Inc.’s love-hate relationship with Wall Street is turning more affectionate, with bullish ratings on the stock at their highest level in over seven years.

Of the 49 analysts following the electric-vehicle maker, 27, or about 55%, recommend buying the stock, according to Bloomberg data. Among the rest, 12 have hold ratings, while 10 have sells. The last time such a high percentage of analysts rated Tesla a buy was in early 2015 -- when it was a much smaller company, with a far cheaper valuation, in a relatively unproven industry.

Tesla shares are rising Tuesday, up as much as 5.6% to touch $255.91, rebounding from Monday’s sharp selloff after third-quarter deliveries missed expectations. Some of the gains were also helped by money manager Cathie Wood’s well publicized purchase of the company’s stock.

While the company’s delivery report was a disappointment, analysts generally see it as a temporary blip. The average 2022 adjusted profit estimate for Tesla has risen more than 80% from 12 months ago, while revenue expectations have jumped 24% over the same period.

“Tesla has not seen demand softening yet,” Deutsche Bank AG analyst Emmanuel Rosner wrote in a note on Tuesday. And even if the company eventually starts seeing softer demand due to pressure on the consumer, “it is best positioned to make price adjustments as necessary,” he wrote.

Still, investors may need more convincing given the stock’s lackluster performance this year, which reflects Tesla’s many challenges. The company is battling industry-wide issues like supply-chain woes and rising raw material costs, company-specific problems such as disruptions in its Shanghai factory, macroeconomic concerns about a possible recession and various distractions related to its outspoken chief executive, Elon Musk.

Tesla shares are down 27% this year despite the latest rally, compared with a 21% decline in the S&P 500 Index.