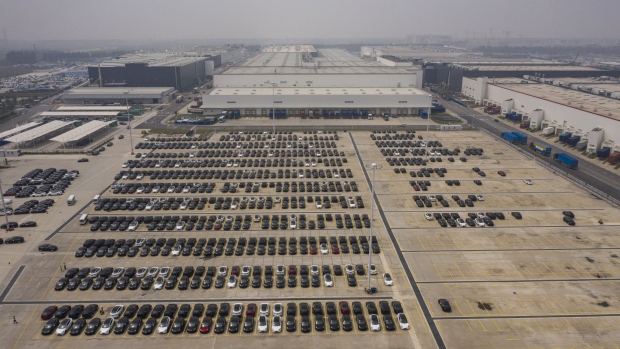 Vehicles in a lot at the Tesla Inc. Gigafactory in Shanghai, China, on Wednesday, June 15, 2022. Tesla has staged a remarkable comeback in terms of its production in China, with May output more than tripling despite the electric carmaker only recently getting its Shanghai factory back up to speed after the city’s punishing lockdowns. , Bloomberg

(Bloomberg) -- Tesla Inc. and SAIC Motor Corp. told Shanghai’s government they may have difficulty maintaining production if a power crunch in Sichuan continues to impact suppliers, people familiar with the matter said, prompting city officials to ask the southwestern province if it could prioritize electricity for the carmakers’ suppliers.

The two carmakers informed authorities in Shanghai that key parts of their supply chains may be impacted by power cuts in Sichuan, which is seeing its worst drought on record. The Shanghai Municipal Commission of Economy and Information then reached out to the government in Sichuan in a document that subsequently circulated on Chinese social media.

Sichuan is one of China’s most populous provinces. It is highly reliant on hydropower, making it particularly vulnerable to a heat wave and drought that’s pushing up air-conditioning demand and drying up reservoirs behind hydro dams.

According to the document, the Shanghai government asked that electricity supply to 16 auto-parts suppliers based in Sichuan -- including Chengdu Yinli Car Parts, the only company named in the document -- be extended.

Tesla is coordinating with the Shanghai and Sichuan governments to ensure its suppliers in Sichuan have ample power, the people said, adding that the carmakers hadn’t seen any production delays as yet.

A representative for Tesla in China declined to comment. A spokesperson from SAIC, one of China’s largest state-owned automakers, said via WeChat that the company is “actively coordinating with the local government of Sichuan” and working to reduce any impact from the power crunch.

Toyota Motor Corp. and China’s Contemporary Amperex Technology Co. Ltd., the world’s top battery maker, earlier closed plants in Sichuan, with the Japanese automaker shutting a factory in the provincial capital of Chengdu and CATL halting activity at its major lithium battery base in Yibin. Both suspensions are expected to last through Aug. 20.

The idea Tesla and SAIC suppliers may be prioritized for power as people suffer in what is intense heat sparked a backlash on Chinese social media with people calling the Shanghai government and its entities selfish and arrogant.

“The lives of people in Sichuan seem less important than Tesla,” one post read.

Another said: “It is just too much. We are in desperate need of electricity. Thirteen people were hospitalized yesterday out of heat stroke.”

(Updates with impact to Japanese manufacturers.)