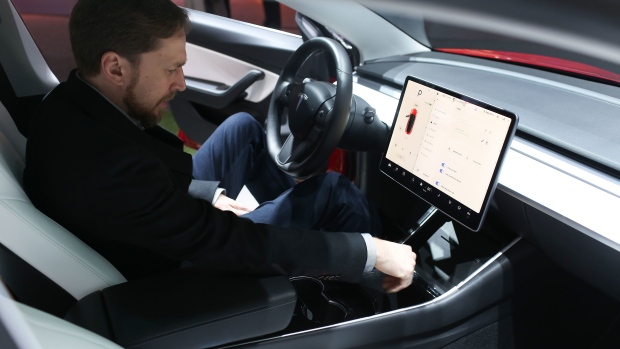 (Bloomberg) -- US auto-safety regulators are scrutinizing Tesla Inc.’s in-car camera systems as part of a recently expanded investigation into whether the company’s automated-driving technology is defective.

In a letter made public on Thursday, the National Highway Traffic Safety Administration asked the automaker a series of questions related to the cameras and the ways they’re used to monitor driver attentiveness.

“Describe the role that the Cabin Camera plays in the enforcement of driver engagement/attentiveness and the manner in which its inputs are factored into the subject system’s operation,” the agency asked in a letter to Tesla Field Quality Director Eddie Gates. NHTSA also asked Tesla to describe “the engineering and safety explanation” for certain design decisions regarding automated systems including its Autopilot feature.

The questions offer hints on what specific features and technology regulators are looking at as part of the investigation opened last year. The probe, which was launched after a dozen collisions at crash scenes involving first-responder vehicles, signaled a change in regulatory posture toward Tesla following years of complaints from safety advocates about the company’s marketing of its driver-assistance systems under the names Autopilot and Full Self Driving.

Tesla, which has disbanded its media relations department, didn’t respond to a request for comment.

The agency gave Tesla a Sept. 19 deadline to respond to the bulk of the questions.

Separately, Tesla has also requested to defend itself against allegations it falsely advertises its Autopilot system in another investigation into its marketing practices being conducted by the California Department of Motor Vehicles, the agency confirmed on Thursday. Reuters reported earlier on the California notice.