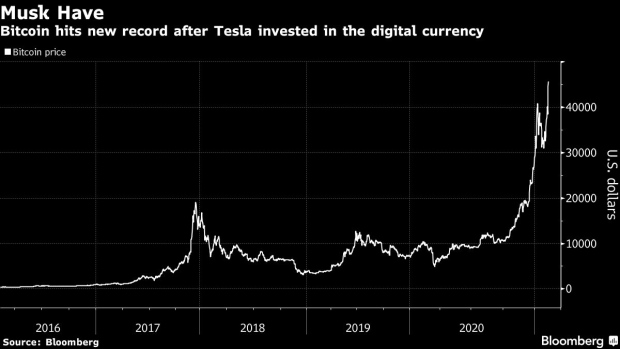 A Tesla Inc. Supercharger station stands illuminated at night in Rubigen, Switzerland, on Thursday, Aug. 16, 2018. Tesla chief executive officer Elon Musk has captivated the financial world by blurting out via Twitter his vision of transforming Tesla into a private company. , Bloomberg

(Bloomberg) -- Tesla Inc.’s purchase of $1.5 billion in Bitcoin may have forced cryptocurrencies onto the agenda of corporate treasurers worldwide.

While crypto acolytes have been saying for some time that corporate adoption is imminent, in reality it had been limited to firms such as MicroStrategy Inc. and Square Inc. Tesla getting involved -- the fourth biggest company in the S&P 500 and helmed by the world’s richest man -- brings the discussion to the big leagues.

“We see fundamental reasons for corporate crypto treasury exposure and expect others to follow suit,” wrote strategists at Fundstrat Global Advisors including David Grider on Monday, citing increased payment acceptance and the threat of disruption from blockchain. “We don’t think this happens overnight, but we do think there’s much more room for corporate treasury penetration and expect the trend to continue.”

Bitcoin hit a fresh record above $47,000 on Tuesday after Tesla signaled its intent to begin accepting the cryptocurrency as a form of payment. It quadrupled last year and is up another 60% so far this year amid endorsements from high-profile investors like Paul Tudor Jones and companies like PayPal Holdings Inc.

Still, though Tesla’s investment of $1.5 billion makes up about 8% of its most recent cash reserves, it’s a drop in the ocean compared to the holdings of America’s blue-chip corporates. The purchase is worth just 0.05% of the $2.79 trillion of cash and cash-equivalents held on the balance sheets of S&P 500 members, according to data compiled by Bloomberg.

For the likes of treasurers, the asset class is just too risky, according to James Angel, an associate professor at Georgetown University. There is no compelling business case for Tesla, or any other corporation, to speculate in Bitcoin, he said in e-mailed comments.

“Corporate cash managers are generally quite conservative and invest corporate cash balances in safe liquid assets,” Angel said. “Bitcoin is highly volatile and can easily go up or down 10% in a day or 50% in a year -- certainly not a good short-term store of value.”

And while Tesla announced plans to accept Bitcoin for purchases, hardly anyone uses the cryptocurrency for anything beyond speculation. Data from New York-based blockchain researcher Chainalysis Inc. showed that only 1.3% of economic transactions came from merchants in the first four months of 2019.

Others disagree and insist there is growing interest from the corporate world. MicroStrategy’s CEO Michael Saylor last week hosted a seminar on corporate adoption and said beforehand that professionals from more than 1,400 firms were expected to join.

“Bitcoin as a corporate treasury asset is not yet a mainstream business strategy, but firms like MicroStrategy and now Tesla are highly visible advocates,” said Seamus Donoghue, vice president of sales and business development at digital infrastructure provider Metaco. “With such vocal sponsors leading corporate adoption, further adoption will follow much faster than currently expected.”

Some sectors may warm to Bitcoin more quickly than others, with tech firms and financial companies likely to be more disposed to the idea of digital currencies, according to Fundstrat.

“I wouldn’t be surprised to have an announcement from some of the tech giants Facebook or Google within the year,” said Amber Ghaddar, founder of fintech firm AllianceBlock. “But I think the road is still long for the more traditional treasurers.”