Chip shortages and supply chain bottlenecks most likely to persist for the auto sector in 2022: Analyst

The days after New Year’s are all about looking ahead — we’ll get to that — but I have to start 2022 by calling out an unrealized resolution for 2021.

Tesla’s German factory still isn’t up and running, even though Elon Musk predicted in October the facility near Berlin would churn out Model Ys before the year was over.

To be fair, this wasn’t entirely up to Musk. Local authorities have yet to give the project the final green light, delaying Tesla’s European expansion just as its local rivals step on the accelerator.

Stellantis yesterday announced deals to develop software with Amazon and sell its Ram ProMaster electric delivery vehicle to the online retailer. Daimler’s Mercedes-Benz on Monday unveiled a battery-powered prototype that can drive more than 620 miles per charge, while Volkswagen last month allocated some US$100 billion to EV and software development over the next half decade, the German giant’s biggest such budget yet.

Tesla has built a sizable lead in mass-producing and selling EVs, but 2022 may well be the year when traditional automakers try to catch up in earnest.

Here are some other storylines I’ll be watching this year:

Let’s get the bad news out of the way first: The semiconductor shortage that decimated auto production and sales last year is poised to stick around in 2022. Delivery times for chips lengthened six days to roughly 26 weeks in December compared with the previous month, according to research by Susquehanna Financial Group — the longest since the firm began tracking the data in 2017. 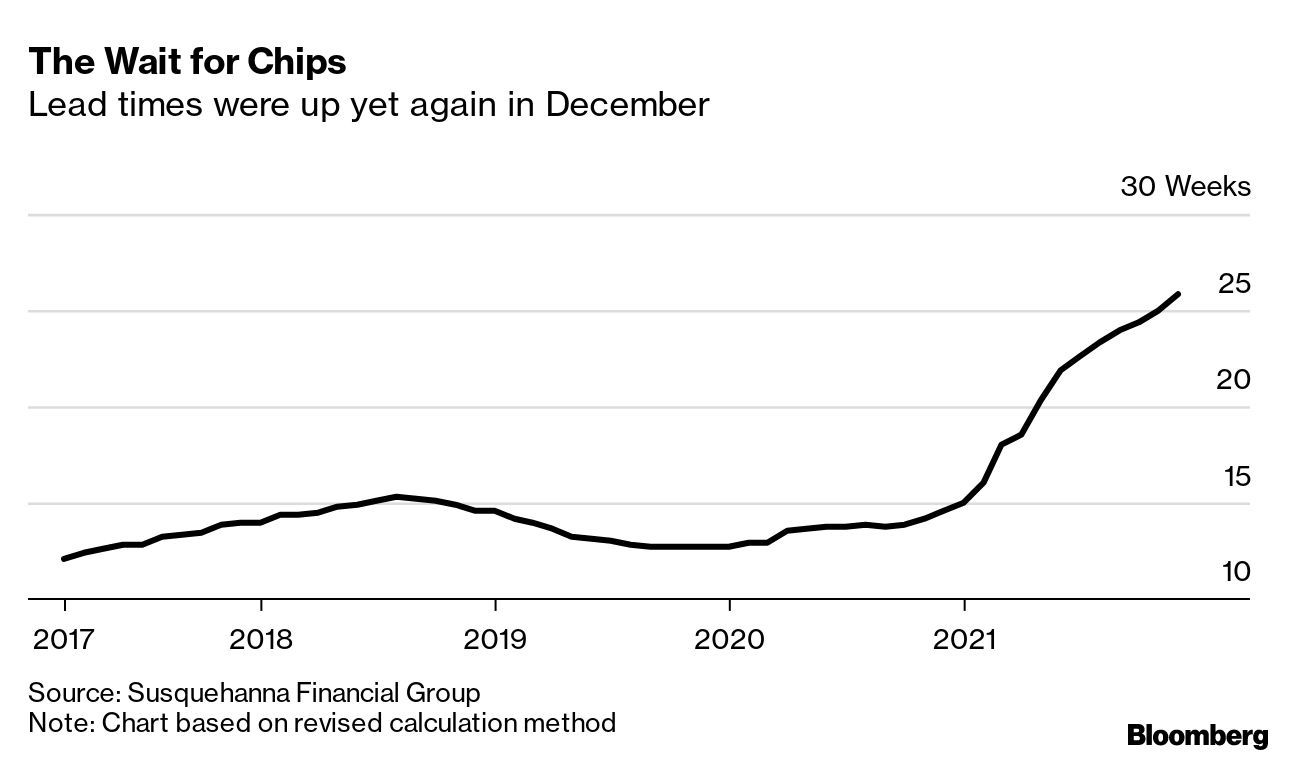 Mercedes said this week it’s keeping in place a task force set up in response to the bottleneck because it’s expecting especially limited supply in the first half. The luxury-car maker expects the situation to ease toward the end of the year, but that was also the prediction in early 2021 until fires and freak weather exacerbated the shortage.

My colleagues in Asia recently wrote in this space about the steps carmakers are taking to gain greater control over chip availability. Stellantis, for example, has inked a deal with Foxconn to jointly develop the components. I’d expect more of those agreements to take form over the coming months.

Tesla’s strong performance in China, the world’s biggest auto market, helped fuel the company’s impressive year-end deliveries. China is the largest market for VW, BMW and Mercedes, so defending or even expanding market share there will be a major priority for all three German manufacturers.

This year is also special because China’s relaxed foreign ownership rules take effect. BMW — which just revealed it beat Mercedes in global luxury-car sales last year for the first time since 2015 —  expects to get a nod this quarter from Chinese regulators for its plan to fully consolidate its local car-making joint venture with China's Brilliance. This would allow BMW to include the firm’s results in its reporting, substantially boosting revenue, cash flow and earnings.

The relaxed rules may also create an opening for Mercedes to lift its stake in its main Chinese joint venture with BAIC Motor from the current 49 per cent. BAIC Automotive Group owns roughly 10 per cent of Mercedes parent Daimler, and the Germans last month referred to the partnership as a “role model for Sino-German cooperation” after collaborating on vehicle development and production since 2003.

Doubling down on the project with BAIC would make sense also because Daimler is downsizing a tie-up with BYD. The German manufacturer said last month it will cut its stake in the 50-50 electric-car venture Denza to just 10 per cent following years of weak sales.