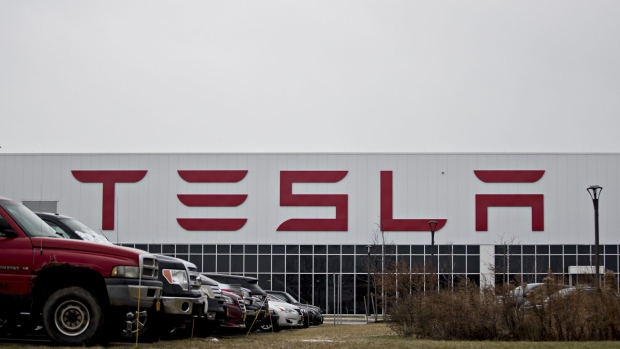 Vehicles sit parked outside the Tesla Inc. solar panel factory in Buffalo, New York, U.S., on Wednesday, Dec. 26, 2018. Employees at the factory this month kicked off a union-organizing campaign, a fresh challenge to the automaker that has so far successfully resisted similar efforts by the United Auto Workers at its sole car plant in Fremont, California. Photographer: Andrew Harrer/Bloomberg , Bloomberg

Tesla says it delivered more electric vehicles worldwide in the second quarter than it did in the first. The increase came even though coronavirus restrictions forced it to shut down its only U.S. factory for much of the period.

Coronavirus restrictions adopted in the San Francisco Bay Area forced Tesla to close its only U.S. assembly plant in Fremont, California, for almost two months starting March 23. It didn't reopen until May 11.

The Palo Alto, California, company said it delivered 10,600 of its older Models, the S sedan and X SUV. The newer Y small SUV and Model 3 smaller car accounted for the bulk of the sales at 80,050.

The sales performance beat Wall Street estimates of 72,000 for the second quarter, according to FactSet.

It came with a feverish push to crank out and sell more vehicles in the U.S., and it gives the company a shot at breaking even when second-quarter financial results are released.

The push came with numerous quality problems reported on Tesla owner forums and social media. Many Model Y buyers reported rejecting their SUVs due to mismatched paint and body panels that didn't fit properly. Many others reported that their vehicles were flawless.

At the end of the second quarter, CEO Elon Musk told employees in an emailed note that prospects for the company breaking even for the period are tight, and he's asked them to go all-out to make it happen.

In the message to Tesla's roughly 48,000 workers, Musk wrote that it "really makes a difference for every car you build and deliver."

In the first quarter, the company eked out a US$16 million net profit, its third-straight profitable quarter.

After the numbers were announced, Tesla's share price shot up nearly nine per cent in premarket trading to US$1,215.69.

"While our main factory in Fremont was shut down for much of the quarter, we have successfully ramped production back to prior levels," Tesla said in a statement Thursday.

The second-quarter numbers bring Tesla's sales for the first half of the year to 185,850, behind the pace needed to meet Musk's brash prediction of selling more than 500,000 cars for the year. That would be significantly higher than the company's sales of 367,500 last year.

The sales figures came one day after Tesla's market capitalization surpassed Toyota to become the world's most valuable auto company.