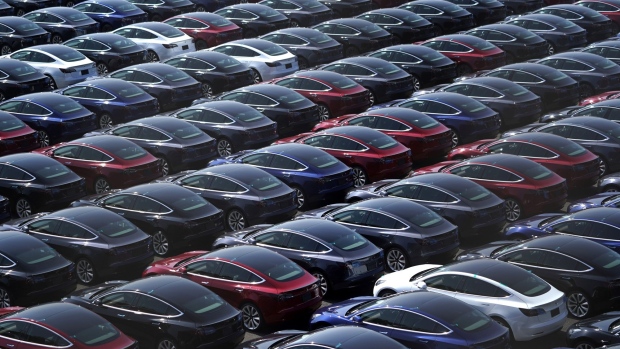 Tesla vehicles after arriving at a port in Yokohama, Japan. , Bloomberg

(Bloomberg) -- Tesla Inc.’s Model 3 sales appear to be taking off in Japan since it cut prices on the mid-range electric sedan last month.

Delivery times for the vehicle have expanded to 12-to-16 weeks, compared with six-to-eight weeks before the price reduction, according to a person with knowledge of the matter. Reservations for test drives are also harder to get, with wait times now at more than three weeks instead of one week, said the person, asking not to be identified because the information isn’t public.

Tesla cut the price of the long-range version of the Model 3 by 24% last month to 4.99 million yen ($46,700), putting it in reach of consumers seeking to buy low-end luxury vehicles. With Japan’s government pushing to ban sales of cars with gasoline-only engines by the mid-2030s, Tesla’s price cut is putting Japan’s automakers on notice for a potential price war in the world’s third-largest car market.

“This proves that EVs will sell if they’re cheaper,” said Takeshi Miyao, an analyst at consulting firm Carnorama in Tokyo. “It’s a shocking situation” for Japanese automakers, he said.

Read more: Tesla Cuts Model 3 Prices in Japan By as Much as 24%

Honda Motor Co. and Mazda Motor Corp. both started selling EVs last year, each with a price tag of about 4.5 million yen, but with a much smaller driving range compared with the Model 3. Nissan Motor Co. plans to start selling its Ariya electric crossover SUV later this year. Even including subsidies and rebates, the Model 3 will probably remain one of the most affordable EV options in Japan.

Tesla has been in Japan for about six years, with Chief Executive Officer Elon Musk calling the market one of the most important for the EV company. Yet, data shows that sales never really took off, and Tesla sold less than 2,000 units in the country in 2020, up slightly from the prior year.

At the same time, Tesla lacks the name recognition within Japan enjoyed by domestic automakers. A 2019 poll by Nikkei Research found only half of 1,000 adults polled knew of Tesla. That compares with 98% who said they knew of Nissan. And EV passenger cars made up only 21,000 of the 5.2 million new vehicles registered in Japan in 2019, according to Japan’s Automobile Manufacturers Association.

The price cut for the Model 3 was the first in Japan, made possible because Tesla will start importing vehicles into Japan from its Shanghai factory instead of from the U.S., a person familiar with the matter has said. Given Tesla’s production capacity and its ability to procure battery supplies in China, Japanese manufacturers will struggle to compete, Miyao said.

“It’s going to be difficult for them offer a similar value proposition,” he said.