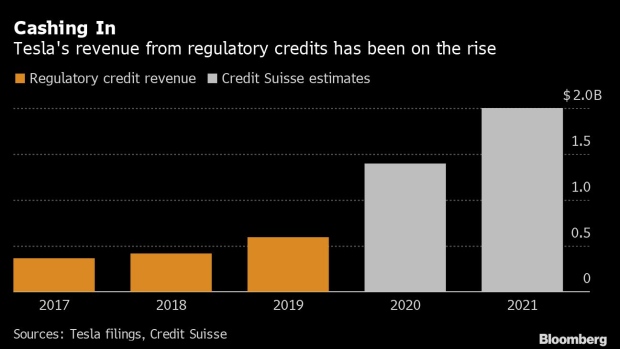 Two Tesla Inc. Model S electric vehicles charge at a Supercharger station in Sant Cugat, Spain, on Wednesday, July 10, 2019. Tesla is poised to increase production at its California car plant and is back in hiring mode, according to an internal email sent days after the company wrapped up a record quarter of deliveries. Photographer: Angel Garcia/Bloomberg , Bloomberg

(Bloomberg) -- Tesla Inc.’s business selling regulatory credits to automakers that need help complying with emissions rules will keep on booming this year, according to Credit Suisse.

Regulatory credit revenue probably will rise to $2 billion from about $1.4 billion in 2020, analyst Dan Levy predicted in a note previewing Tesla’s quarterly earnings Wednesday. He wrote that his estimate for 2021 is higher than consensus of $1.3 billion.

A surge in regulatory-credit revenue had been a major factor in Tesla’s streak of quarterly profits that’s sent shares soaring and made the stock eligible for the S&P 500. Levy suggested in his note that Europe’s stricter limits on automotive carbon-dioxide emissions will present an opportunity for the company this year.

Tesla doesn’t say which carmakers it sells credits to, though General Motors Co. and Fiat Chrysler disclosed in 2019 that they had reached agreements to buy U.S. greenhouse-gas credits from the company. Fiat Chrysler also estimated that year it would spend 1.8 billion euros ($2.2 billion) on credits over several years and announced it would pool its fleet with Tesla’s to comply with the European Union’s CO2 standards.