Tesla will be one of the biggest tech disruptors over the next three to five years: Analyst

Tesla Inc.’s shares dropped the most in three months after the carmaker blamed a disappointing deliveries report on shipment issues that increased the number of vehicles that were on their way to customers as the quarter came to a close.

The maker of Model 3 sedans and Model Y crossovers handed over 343,830 vehicles to customers in the last three months, short of the almost 358,000 total that analysts expected. The stock fell 8.2 per cent at 11:20 a.m. in New York, the biggest intraday decline since June 16.

Tesla has for years delivered big batches of vehicles toward the end of each quarter, a practice Chief Executive Officer Elon Musk has tried to move away from by localizing production in all major regions. While the carmaker opened its first European factory in Germany in March, record shipping costs are still bedeviling the auto industry along with shortages of semiconductors and other components.

“As our production volumes continue to grow, it is becoming increasingly challenging to secure vehicle transportation capacity and at a reasonable cost during these peak logistics weeks,” Tesla said in a statement Sunday. “In Q3, we began transitioning to a more even regional mix of vehicle builds each week, which led to an increase in cars in transit at the end of the quarter.”

Through the first nine months of the year, Tesla’s deliveries are up about 45 per cent, shy of the 50 per cent average annual growth rate the company has targeted for the next several years. Legacy automakers and new entrants alike are bringing more EVs to market to take on Tesla, which has led the charge for battery-powered cars since the Model S sedan debuted a decade ago.

“Naysayers on the Tesla story will point to the shortfall in 3Q as a demand issue,” Jeffrey Osborne, an analyst at Cowen & Co. with the equivalent of a holding rating on the shares, wrote in a report. “Monthly registrations and 4Q results will need to be monitored to better assess the situation.”

Tesla had said that its delivery count is conservative and that final numbers could vary by 0.5 per cent or more. The company produced 365,923 vehicles for the quarter. 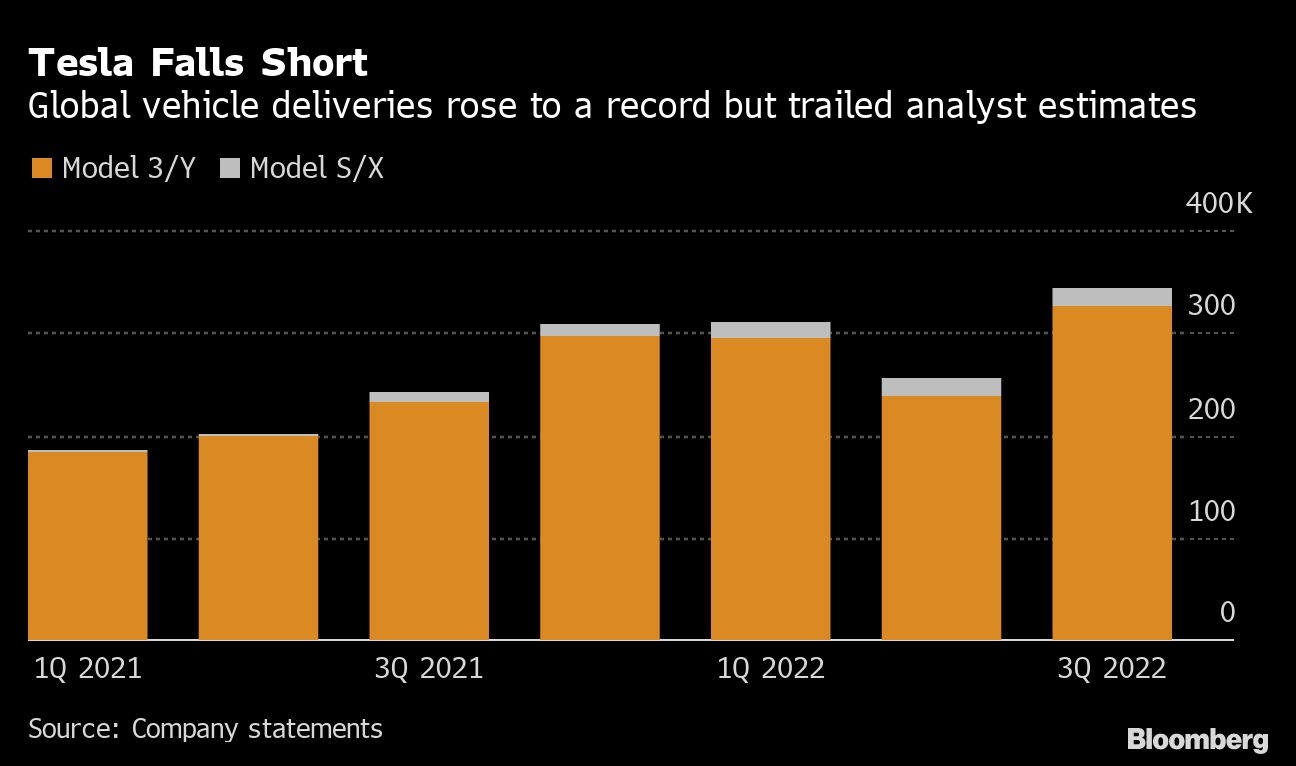 Musk wrote in a series of tweets on Sunday that the company was “smoothing out” the number of vehicles it hands over to customers from quarter to quarter. Deliveries rose to a record in the last three months, recovering from lockdowns in Shanghai that crimped production in the second quarter.

“Customer experience suffers when there is an end of quarter rush,” Musk wrote in one post. “Steady as she goes is the right move.”

Tesla doesn’t break out sales by geography, but the US and China are its largest markets. The Model 3 and Model Y accounted for almost 95% of last quarter’s deliveries. The company also makes the Model S and X at its factory in Fremont, California.

The delivery figures came on the heels of Tesla’s AI Day event, held after the close on Sept. 30. Musk showed off a prototype humanoid that walked and raised its hands just over a year after a human dressed as robot danced on stage during a similar showcase of the company’s artificial intelligence efforts in August 2021.

“One of the main purposes of hosting AI day 2 was to attract talent,” Ben Kallo, a Baird analyst who rates Tesla the equivalent of a buy, said in a note. “This is a critical piece of advancing its initiatives as the shortage of laborers in the market continues, specifically for highly trained engineers.”