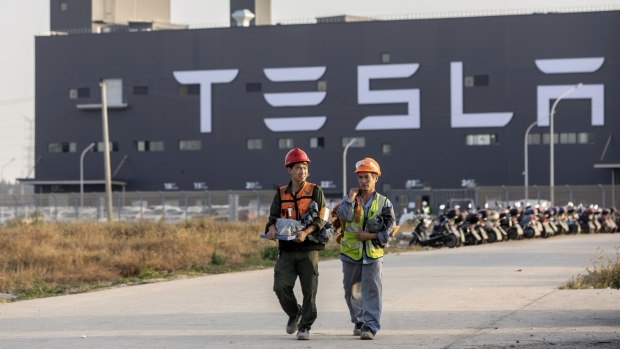 Tesla Inc. unveiled its first vehicles built in China, a milestone for Elon Musk’s company as it prepares to start sales of domestically-made electric sedans in the world’s largest auto market.

Assembled in Tesla’s new Shanghai Gigafactory, which only broke ground in January, the first Model 3 sedans came in blue and were emblazoned with the brand name in Chinese characters. Selected local media were invited late last week to test drive the vehicles, which start at about $50,000.

China’s first plant wholly owned by a foreign carmaker — and Tesla’s first outside the U.S. — is a crucial test of Musk’s bid to keep his carmaker profitable as he bets on Chinese demand for electric vehicles.

The plant is producing cars in small quantities as part of preparations. Tesla is working with local authorities to obtain manufacturing certification and hopes to get it by year-end, Chairman Robyn Denholm said last week in Shanghai.