Tesla Inc. reported better-than-expected second-quarter earnings, as strong sales of its electric vehicles fattened margins and delivered US$1 billion in net income, a milestone for the 18-year-old company.

Profit more than tripled to US$1.45 a share on an adjusted basis, beating the 97-cent average of analysts’ estimates and marking the eighth straight quarter of profit. Tesla shares rose as much as 2.6 per cent before the start of regular trading Tuesday.

Rising sales of the mass-market Y and Model 3 sedan delivered a fourfold increase in operating income, even as Tesla grappled with chip shortages and port congestion, and slogged through a costly ramp up of new S and X models. The company widened its margins from core auto operations to 25.8 per cent, from 22 per cent in the prior quarter and 18.7 per cent a year earlier.

“It puts them down the path of being the best in class automotive company from a margin perspective,” analyst Ben Kallo of Robert W. Baird said after the results were announced. “I don’t think anyone expected this big of a beat, but with a market cap over US$600 billion it takes more to move the stock than it used to.”

“Our auto gross margin excluding credits has increased nearly 10 percentage points to our highest yet since the introduction of Model 3,” Chief Financial Officer Zachary Kirkhorn said on a conference call with analysts. That was possible because Tesla has lowered the cost of making cars more than it has cut prices, he said.

While Tesla is still by far the world’s biggest automaker by market value, its shares have declined 6.8 per cent this year even as the S&P 500 has reached new highs. More-established peers, such as General Motors Co. and Ford Motor Co., have rallied as they have aggressively pushed into the nascent electric-vehicle market.

More competition from rival EVs comes against a backdrop of supply-chain challenges from a global semiconductor shortage and higher commodity prices. Chief Executive Officer Elon Musk said Tesla has had factory shutdowns due to parts shortages but was able to find substitute suppliers for some semiconductors. He warned the chip shortfall may crimp Tesla’s plans for boosting output.

“The global chip shortage situation remains quite serious,” Musk said on the call. “It does seem like it’s getting better, but it’s hard to predict.”

Tesla’s second-quarter revenue almost doubled to US$11.96 billion in the April through June period, beating analysts’ estimates of US$11.36 billion. Income from the sale of regulatory credits -- used by other automakers to offset greenhouse gas emissions -- totaled US$354 million, down from US$518 million in the first three months of the year.

Tesla was profitable without the help of regulatory credit revenue, analysts noted.

Musk, who said he was speaking from the site of a new factory under construction in Austin, Texas, dropped a minor bombshell: going forward, he will no longer participate in all of Tesla’s quarterly earnings calls.

“Obviously, I’ll do the annual shareholder meeting but I think that going forward I will most likely not be on earnings calls unless there’s something really important that I need to say,” he said.

The company confirmed a forecast for 50 per cent growth in deliveries “over a multi-year horizon,” but added, “in some years we may grow faster, which we expect to be the case in 2021.” The automaker said it is “on track” to start output of its Model Y crossover in two new plants -- the one in Austin, and another in Berlin -- by year-end.

Tesla pushed back the start date for its Semi Truck, first unveiled in 2017, yet again to next year. Production of its highly anticipated Cybertruck pickup will follow the Model Y in Austin, but Tesla didn’t provide further details.

“I don’t think anyone is surprised that the Semi is delayed and that the focus is on Model Y and Cybertruck,” analyst Gene Munster of Loup Ventures said in a phone interview Monday.

Free cash flow came to US$619 million, compared with the US$319.1 million loss projected by analysts. That was helped by deliveries of 201,250 cars worldwide in the second quarter, compared with 90,891 a year ago. 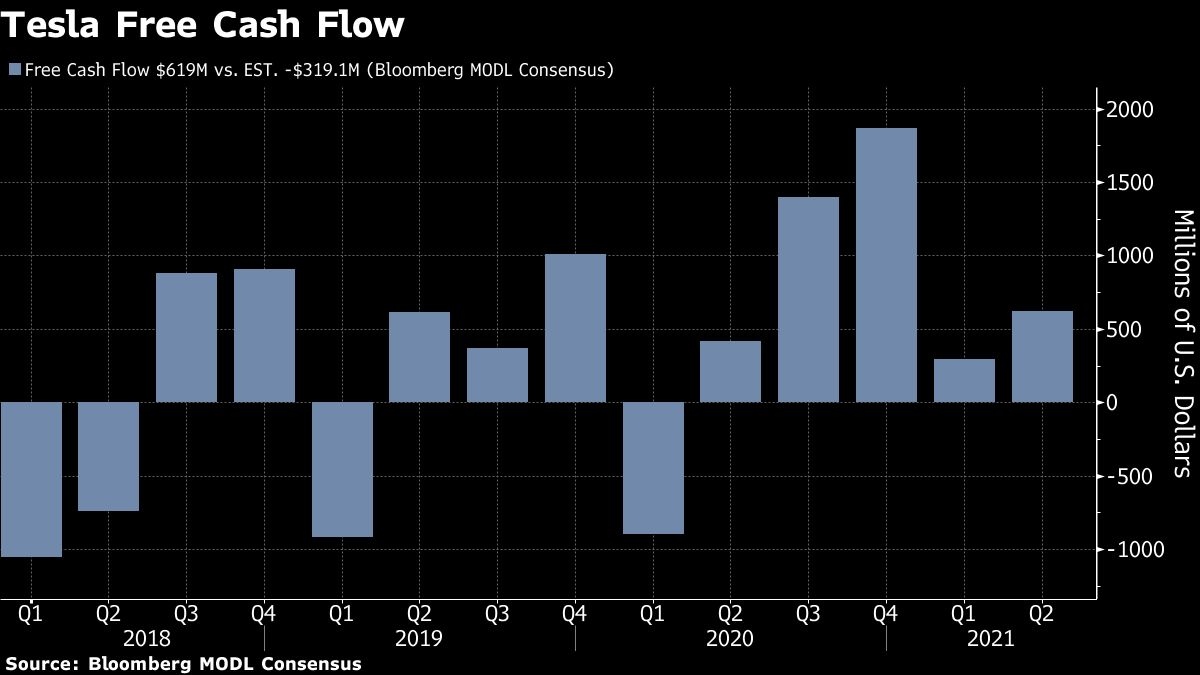 Tesla said it had a “Bitcoin-related impairment” of US$23 million in the quarter, a rounding error compared with its digital assets totaling US$1.31 billion as of June 30.

The company disclosed in early February that it invested US$1.5 billion in corporate cash to buy Bitcoin and said it would start accepting payments in the token, which sent the cryptocurrency’s price to a record and lent legitimacy to virtual currencies. But Musk later suspended vehicle purchases with Bitcoin on concerns about its environmental impact, which sent its value tumbling.

Tesla’s recent challenges in China and the profusion of U.S. regulatory probes into crashes involving Autopilot, its driver assistance feature, have cast a shadow over its prospects. While Musk didn’t address the company’s business in the Chinese market -- the world’s largest -- he said that U.S. regulators were not a “fundamental limiter” to deploying fully autonomous vehicles.

When asked about the take rate for Tesla’s FSD, or Full Self Driving, function, he acknowledged that it is still not ready for wide release.

“We need to make full self driving work, in order for it to be a compelling value proposition, otherwise people are kind of betting on the future,” said Musk. “Like right now, does it make sense for someone to do an FSD subscription? It’s debatable. But once we have FSD widely deployed than the value proposition will be clear and everyone will use it.”