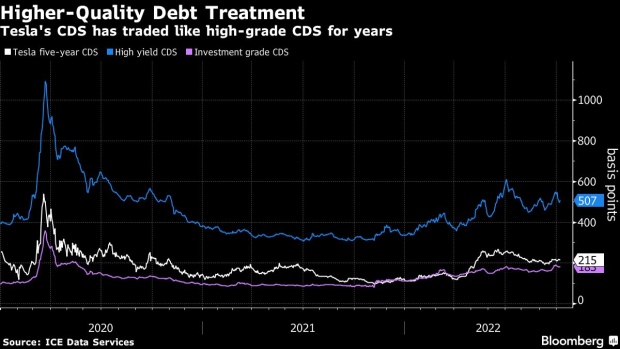 (Bloomberg) -- Tesla Inc. has secured a new $5 billion revolving credit facility, another sign that the company is nearing investment-grade status.

The electric-vehicle maker may increase the facility by up to $2 billion, according to a filing. Citigroup Inc. is the administrative agent for the revolver, which has a five-year maturity.

Revolvers are like credit cards that a company can use to borrow, pay back, and then borrow again over a period of time. Investment-grade rated companies typically don’t draw on their revolvers and instead use them as a back-up in case other sources of liquidity dry up.

Tesla currently has a high-yield rating one notch below investment grade from Moody’s Investors Service, with a positive outlook. S&P Global Ratings in October upgraded the company to high-grade status. Tesla isn’t rated by Fitch Ratings. The company needs one more ratings upgrade to be considered broadly investment grade.

The car manufacturer is already being treated like a blue-chip company by many investors and analysts. Most of its bonds are unsecured, indicating that investors trust the company’s ability to pay back its dues.

Its credit default swaps — which protect investors from default — are trading more like high-grade swaps than high-yield. Tesla’s five-year CDS is currently trading at 208 basis points.

Tesla has cut about $9.5 billion in debt since its short- and long-term obligations peaked at $15.3 billion in late June 2020, Bloomberg Intelligence analyst Joel Levington wrote in a Jan. 12 note. It has also improved its cash generation and built out its capital reserves, Levington said.

“Tesla’s creditworthiness may approach Porsche, Honda and Volkswagen within the next 12 to 18 months, making its Ba1/BBB ratings look stale despite an unprecedented upgrade cycle for the automotive sector,” Levington wrote.

Getting that upgrade from high-yield to investment-grade status grants companies additional benefits, including broader access to financing. Companies usually act quickly when they gain additional flexibility, looking at financing options they wouldn’t have been afforded before.

T-Mobile US Inc., who acquired investment-grade status in July, in October boosted its revolving credit facility by $2 billion. The telecommunications firm operated as a junk-rated company for years, during which it built out its wireless networks and bought rival Sprint.

The company reported better-than expected results in its latest quarter, signaling strength as it faces growing questions about demand from car buyers for its all-electric vehicle lineup.