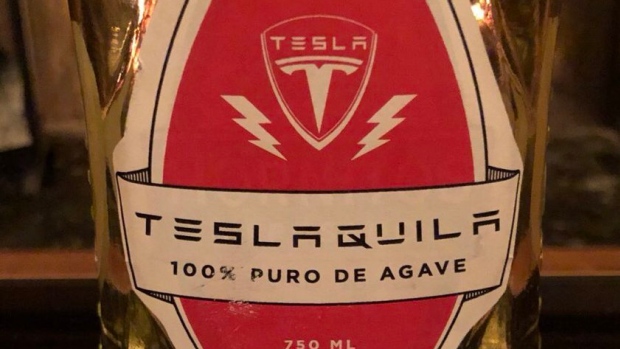 What started as an April Fools’ Day joke that left a poor taste in Tesla Inc. investors’ mouths may soon become a reality.

The electric-car maker submitted a trademark application on Oct. 8 for Teslaquila, describing the planned product as a distilled agave liquor. It was filed as “based on intent to use,” which means Tesla doesn’t have the product ready just yet. The company needs to actually be making a product to obtain the trademark.

Tesla Chief Executive Officer Elon Musk tweeted Friday that the brand would be coming soon. Musk also posted a mock-up of roughly what the tequila bottle will look like.

The phrase originated as an April Fools’ prank in which Musk tweeted that Tesla was going bankrupt. He posted jokingly that he had been “found passed out against a Tesla Model 3, surrounded by ‘Teslaquila’ bottles.”

Elon was found passed out against a Tesla Model 3, surrounded by "Teslaquilla" bottles, the tracks of dried tears still visible on his cheeks.

This is not a forward-looking statement, because, obviously, what's the point?

Tesla shares plunged the following trading day and closed down 5.1 per cent on April 2. The stock has sold off more recently in no small part thanks to Musk’s tweets in August about taking the company private. He abandoned that effort in a matter of weeks and has agreed to settle a securities fraud lawsuit brought by the U.S. Securities and Exchange Commission.