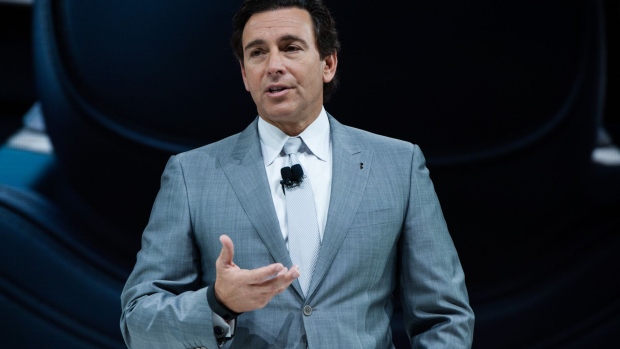 (Bloomberg) -- Hertz Global Holdings Inc.’s $4.2 billion deal with Tesla Inc. is about more than just an order for 100,000 cars. It’s about vaulting electric vehicles into the mainstream.

Not only does Tesla get a huge order at a premium price, it gets a way for the electric-curious masses to test-drive its Model 3. Hertz, meanwhile, gets to tap into the growing interest in EVs while aligning itself with the industry’s leader and sexiest brand. Tesla also will benefit from exposure in a splashy Hertz ad campaign starring seven-time Super Bowl Champion Tom Brady.

“This is an opportunity not only to fix the business, but also to employ a strategy that allows us to play a central role in development of the modern mobility industry,” Mark Fields, Hertz’s new interim chief executive officer and a former CEO of Ford Motor Co., said in an interview. “One of our objectives is to lead in the adoption of electric vehicles.”

Investors clearly thought the announcement was bigger than the financial terms alone. The deal, first reported Monday by Bloomberg News, sent Tesla soaring to a $1.03 trillion valuation and added about $1.2 billion in market value for Hertz, which is just four months out of bankruptcy protection. Tesla rose 13% to a record $1,024.86, while the rental-car company gained 10% to $27.17.

Even Tesla CEO Elon Musk said in Twitter post that he was a bit surprised by the “strange” jump in value, considering that his automaker’s already selling as many cars as it can make as it speeds up production.

Hertz will have a competitive advantage, Fields said, as consumers look for options other than traditional internal-combustion vehicles. Even in a down U.S. auto market in the third quarter, sales of electric vehicles jumped 60% and accounted for a record 1 out of every 10 sales, according to Cox Automotive. Nearly 40% of U.S. car buyers said they would consider an EV for their next vehicle purchase, according to a recent survey by the Pew Research Center.

“When a lot of consumers think electric vehicle, they think of Tesla, and now if they want to rent one, they’ll think of Hertz,” said David Whiston, automotive analyst for Morningstar Inc. in Chicago. “Eventually, there will be much more competition.”

Hertz picked an ideal time to get in the game, Whiston said, and EV-makers will benefit as well if renters turn into buyers down the road.

“It’s a great way for consumers to get that EV experience for a few days or a weekend trip or a vacation,” Whiston said. “For a lot of them, it will probably be a good experience, which could help them, if they were on the fence, to take the plunge.”

Tesla is in the midst of a vast production push as plants in California and China expand, while factories in Texas and Berlin set to open this year. Analysts say Tesla, which sold fewer than a half-million cars last year, could have the capacity to build 1.5 million EVs next year.

“EV demand continues to go through a structural shift,” Tesla told shareholders in its third quarter presentation Oct. 20. “We believe the more vehicles we have on the road, the more Tesla owners are able to spread the word about the benefits of EVs.”

Until now, Tesla has relied on word-of-mouth and eschewed traditional advertising entirely. But a side benefit of this deal is the Hertz ad campaign where Model 3 rentals will be the focus of Brady’s message.

Two TV spots debuting today -- entitled “Plugged In” and “Speed” -- show the Tampa Bay Buccaneers quarterback renting, recharging and driving a Tesla from an airport. The tag-line for the commercials is Brady’s signature exhortation, “Let’s Go!”

Tesla also benefits simply from the size of the order, which is about $4.2 billion, according to people familiar with the terms of the deal. That value suggests Hertz is paying close to full price, breaking with a long-time tradition of automakers selling their wares to rental companies at a deep discount.

The Model 3s, which Hertz said will begin appearing on lots in the U.S. and Europe next month, are said to be well-equipped and not the usual stripped-down models that automakers often relegate to rental fleets. Hertz also said it’s installing “thousands” of charging stations that will augment Tesla’s supercharging ports in the U.S. and Europe.

“The pricing sounds like it’s comparable to retail pricing -- this is not about overproducing and dumping cars into Hertz,” analyst Whiston said. “This won’t hurt Tesla profits. Over time, this should be much more positive for Tesla.”