Tesla Inc. investors are unfazed by the brewing geopolitical tensions between US and China around Taiwan, as the stock rose for a sixth straight session ahead of the company’s annual meeting on Thursday.

The electric-vehicle maker’s stock closed up 2.3 per cent at US$922.19 in New York on Wednesday. After surging 19 per cent in just over a week the shares are now up more than 47 per cent from the May 24 closing low of US$628.16. Better-than-expected second-quarter results and a climate change bill from the Biden administration are helping fuel the enthusiasm for the stock. 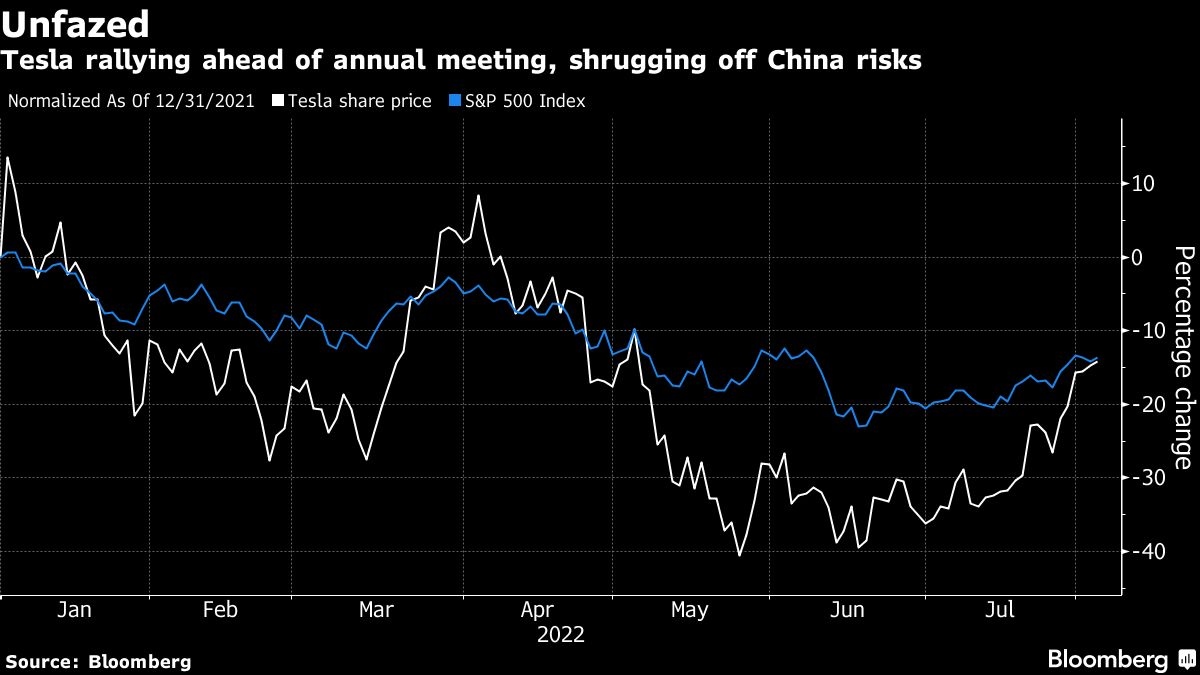 Still, any exuberance may prove short lived as supply chains have yet to normalize, Chief Executive Officer Elon Musk’s lawsuit with Twitter Inc. continues to be an overhang, and the company’s reliance on China remains an issue with Taiwan in focus.

“If the superpowers continue to drift apart, then Tesla’s brand will be damaged in China, impacting sales,” Gene Munster, a former technology analyst who’s now a managing partner at venture-capital firm Loup Ventures, said during a live-blog interview with Bloomberg on Wednesday. “Given production of about 25 per cent of Teslas comes from China, the China government has ways to make it more difficult for Tesla -- like shut downs for COVID or power conservation.”

Tesla will hold its annual general meeting on Thursday, where its investors will get to vote on a 3-for-1 stock-split plan. If approved, it will be Tesla’s second share-split in less than two years.

Stock splits seem to have lost some of their charm this year, but Tesla’s strong retail fan base means it may reap more benefit from the move than some other companies. According to Vanda Research data, retail purchases of Tesla shares are “skyrocketing,” with individual investors seen as most bullish on the company since the summer of 2020.

“Although a stock split shouldn’t have an impact on the stock price, retail investors speculate on the fact that historically stocks rallied after the split announcement,” Vanda’s Marco Iachini and Giacomo Pierantoni wrote in a note to clients. If a split is approved, the shares could go even higher, they added.