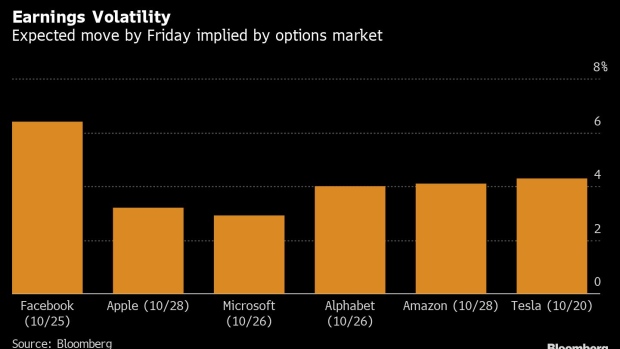 (Bloomberg) -- Some of the world’s largest tech companies, with a combined market value of over $9 trillion, are set to report earnings this week but these behemoths are being overshadowed by Tesla Inc. in the options market.

Tesla, despite reporting earnings on Oct. 20, accounted for eight of the top nine most-traded single stock options on Monday. Tesla $1,000 calls for expiration Friday topped the list with over 210,000 contracts traded as of 2:00 p.m. New York time. The bullish interest comes as the electric-vehicle maker’s market-cap eclipsed the $1 trillion mark on the heels of a 100,000 unit order from car-rental company Hertz Global Holdings Inc.

In contrast, none of Facebook Inc., Alphabet Inc., Microsoft Corp., Apple Inc. or Amazon.com Inc.’s options strikes ranked among the 20 most active in Monday trading.

Among the five tech heavyweights reporting this week, Apple $150 calls for Friday expiration were the most active option strike with over 46,000 contracts traded. Apple is facing power rationing issues in China, according to Bank of America, which reiterated its neutral rating on the iPhone maker on Monday.

Facebook December $270 puts were the most active for the social media giant with over 27,000 contracts traded. Facebook reports third-quarter earnings on Monday after the bell and the interest in downside protection could be due to the 27% drop competitor Snap Inc. experienced on Friday after reporting earnings weighed down by supply-chain issues and changes to Apple’s data-collection rules.

The options market is pricing in a 6.4% move in Facebook’s stock by Friday, the largest of any of the big-cap tech stocks. Facebook has moved an average of 5.2% after its past eight earnings reports. The 4.3% expected swing in Tesla shares is the second largest despite no apparent upcoming catalysts. Microsoft is expected to move the least, at 2.9% on average. It has moved an average of 2.3% over the past eight earnings reports.