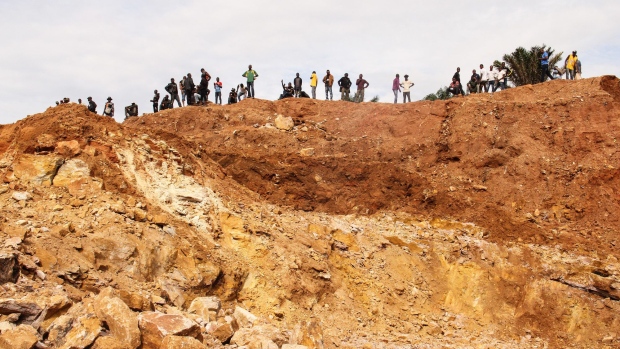 Artisanal miners stand as they wait for safety equipment to arrive and permission to start extracting cobalt on the perimeter of a freshly excavated pit at the Kasulo township in Kolwezi, Democratic Republic of the Congo, on Saturday, Feb. 24, 2018. So-called artisanal mining is as commonplace as farming in many parts of Congo. , Bloomberg

(Bloomberg) -- Tesla Inc. is backing a new initiative to support informal cobalt miners in the Democratic Republic of Congo as carmakers and miners seek to reassure customers about ethically mined supplies of the battery metal.

The company joined the fledgling Fair Cobalt Alliance, according to an updated list of members on the group’s website. The FCA aims to end the use of child labor at mining sites and improve working conditions in Congo. It’s also backed by miner and trader Glencore Plc and major Chinese cobalt refiner Zhejiang Huayou Cobalt Co.

Almost three-quarters of the world’s cobalt comes from Congo and demand is forecast to surge in the coming years. However, artisanal cobalt, produced by small-scale miners who often dig by hand, has become a divisive issue. Groups such as the Organisation for Economic Co-operation and Development have said that child labor and human-rights abuses are common at such sites and production from the country’s artisanal mines often gets mixed in with industrial output.

Before joining the group, Glencore had long argued that customers were better served by buying from its mines, where safety and environmental standards were followed. Still, the informal industry creates tens of thousands of jobs, exploiting small deposits that would be uneconomical for large miners, and groups such as the OECD have said companies should engage with the sector to encourage improvements.

Tesla earlier this year struck a deal with Glencore to buy cobalt from its Congo mines. The company has also been seeking to reduce its reliance on the metal -- while there’s enough cobalt supply for now, demand is expected to surge in the coming years as Tesla expands in China and Europe and Volkswagen AG to BMW AG roll out fleets of electric vehicles.

Tesla did not respond to an email seeking comment.