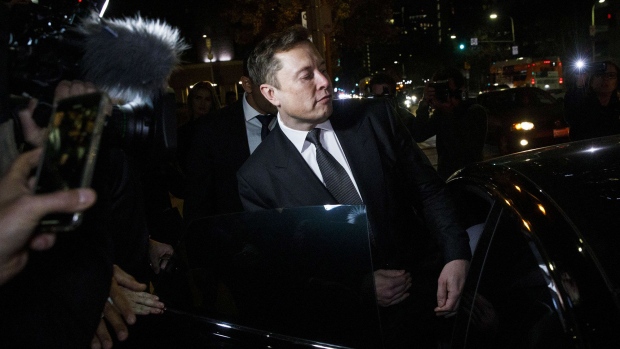 (Bloomberg) -- Elon Musk has never been a fan of the settlement he reached with the US Securities and Exchange Commission over his infamous 2018 tweet about having secured funding to take Tesla Inc. private.

Lucky for the billionaire chief executive officer, that deal can’t be used as ammunition against him and the electric car-maker when investors take them to trial in January. A federal judge on Wednesday ruled it would be unfair to introduce Musk’s accord with the regulator as evidence for the jury that will decide whether the false tweet defrauded investors.

While Musk and Tesla quickly settled the SEC case for $40 million without admitting wrongdoing — and with a promise that the CEO would have his tweets vetted by a Tesla lawyer before posting them — the investor case could set them back more than $1 billion if they lose the trial.

The ruling may give Musk and Tesla some leverage in talks aimed at resolving the dispute before the class-action trial kicks off Jan. 17.

US District Judge Edward Chen in San Francisco brushed away the argument by investors that the jury must learn about both the SEC investigation and settlement as part of its evaluation of the losses they suffered from wild swings in Tesla’s stock price attributed to Musk’s tweets.

“It would be confusing and artificial for the jury to be kept in the dark about its conclusion,” lawyers for the investors argued in a court filing.

Lawyers for Musk and Tesla argued that dredging up the SEC case at trial would “corrupt the jury’s evaluation” of the shareholder case.

Chen said he won’t bar lawyers for the investors from telling the jury about the SEC’s investigation, which made headlines the day after Musk’s initial go-private tweets. But the judge ruled that telling jurors that the probe resulted in a lawsuit and a settlement more than a month later might create “unfair prejudice” against Musk and Tesla.

Investors contend Tesla’s CEO was intentionally deceitful when he tweeted the go-private proposal to his millions of Twitter followers on Aug. 7, 2018, adding that the transaction was buttressed by “funding secured.”

Lawyers for shareholders have never publicly revealed how much they’re seeking in damages for hundreds of investors. A recent court filing by Musk and Tesla cited “billions” at stake.

Musk insists investors are wrong to accuse him of manipulating the stock price and maintains that his short-lived plan to take Tesla private was solid based on discussions he had with Saudi Arabia’s Public Investment Fund.

The judge made it significantly easier for the investors to prevail when he ruled in April that the “funding secured” tweet was false and reckless.

Musk in September asked a federal appeals court to throw out the so-called Twitter Sitter provision of his SEC settlement, calling it an illegal effort to muzzle him.

The world’s richest person complained that the pressure he faced to settle with the regulator was “like having a gun to your child’s head.”

The case is In re Tesla Inc. Securities Litigation, 18-cv-04865, US District Court, Northern District of California (San Francisco).