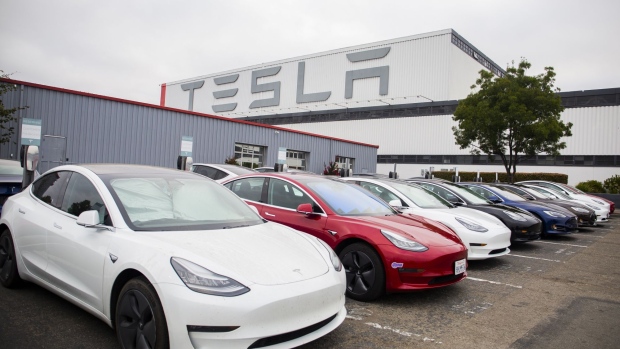 (Bloomberg) -- A judge signaled he’ll probably cut a jury’s award of $137 million in damages to a former Tesla Inc. contract worker over racial abuse in its northern California factory.

The October award to Owen Diaz by jurors in San Francisco federal court is believed to be one of the largest in U.S. history for an individual plaintiff in a racial discrimination case.

U.S. District Judge William Orrick on Wednesday said he was “troubled” that the $6.9 million jurors awarded as emotional distress damages “may be untethered to the distress to which Mr. Diaz and his witnesses testified.” Moreover, punitive damages of almost 20 times that amount are “extremely high,” Orrick said at a hearing on Tesla’s request for a new trial.

“That said, I recognize the awful history of race discrimination in this country,” Orrick said. “Particularly juxtaposed with working at a company that attempted to present itself as a modern, green, disruptive company that pitched itself as a good place to work, would naturally exacerbate the distress that Mr. Diaz felt.”

Orrick said he was inclined to deny Tesla’s request for a new trial on the condition that the Diaz agrees to a reduction in damages. He said he will issue a written ruling but didn’t specify a time frame.

Diaz’s attorney, Michael Rubin, tried to convince the judge to leave the verdict intact. He argued that the jury’s award to compensate Diaz wasn’t “based on passion or prejudice but based on evidence and within constitutional limits.”

The ratio of compensation to punishment damages was appropriate as this was a rare case of “egregious reprehensibility,” Rubin said. Punitive damages are meant to punish and deter and “it’s important to maintain that sting,” he said.

Tesla’s lawyer, Kathleen Sullivan, argued that compensatory damages should be as little as $300,000 and that punitive damages should be less than four times that amount based on similar cases. Tesla could have done more but it did take some steps to discipline employees Diaz had complained about. “Some effort to remediate makes it less reprehensible,” she said.

Tesla has faced a number of high-profile lawsuits over its treatment of Black employees and subcontracted workers at the company’s auto plant in Fremont, California. Its head of human resources, who had defended company amid controversies, Valerie Capers Workman, left for a new job this month.