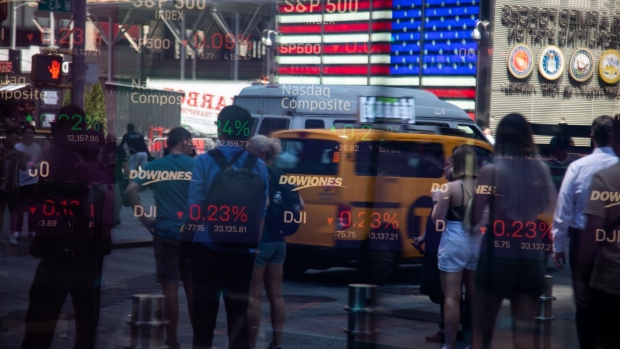 Stock information in a window of the Nasdaq MarketSite in New York, US, on Tuesday, May 31, 2022. The S&P 500 defied bear market status just over a week ago and is set to finish May roughly where it started. Photographer: Michael Nagle/Bloomberg , Bloomberg

Every time there’s a panicked few days’ trading in markets, my inbox gets filled with messages asking whether we’ve seen a capitulation point that clears the way for the next bull market in stocks. The short answer is always: No. The more nuanced answer is differentiating between a capitulation point and THE capitulation point. There will be plenty of the former on the way down. Short-term traders can use them to play the powerful bear-market rallies, but they shouldn’t give long-term investors any reason to relax.

In one way, it’s highly encouraging that everyone is still obsessed about when to “buy the dip.” It shows that the cult of equity isn’t broken in the US and Europe -- there’s no fear yet that we may have seen a multi-decade peak a la Japan in 1989 or (maybe) China in 2007. On the other hand, the bear market probably won’t end until we start hearing more such gloomy prognostications.

So what am I watching for as signs of THE big US equity market capitulation? It’s for the bellwether froth trades to all blow up:

Those are the markers I’m seeking to prove fear has trumped greed and speculative positions have been cleaned out, meaning it’ll be time to become a long-term US stocks bull again.