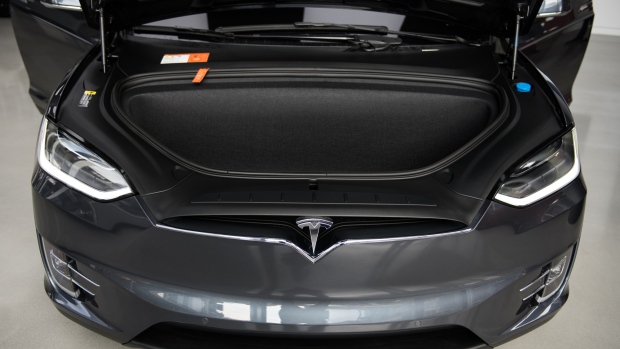 The front trunk space of a Tesla Inc. Model X P100D sports utility vehicle (SUV) is seen at the company's new showroom in New York, U.S., on Thursday, Dec. 14, 2017. The Meatpacking District location, which opens to the public at 11 a.m. Friday, lets customers for the first time explore energy offerings, configure cars and place orders all under one roof. , Bloomberg

(Bloomberg) -- The Tesla Inc. Model X that crashed in California while being guided by its semi-autonomous driving system sped up to 71 miles an hour in the seconds before the vehicle slammed into a highway barrier, investigators said Thursday.

U.S. National Transportation Safety Board issued a preliminary report on the March 23 crash showing that the driver’s hands were detected on the steering wheel only 34 seconds during the last minute before impact.

The investigation is the latest to shine a spotlight into potential flaws in emerging autonomous driving technology. Another NTSB probe of a self-driving Uber Technologies Inc. car that killed a pedestrian March 18 in Arizona found that the car’s sensors picked up the victim, but the vehicle wasn’t programmed to brake for obstructions.

Walter Huang, a 38-year-old engineer who worked at Apple Inc., died in Mountain View, California, in the March 23 crash when his Model X struck a highway barrier as he was using the driver-assistance system known as Autopilot. The car’s computer didn’t sense his hands on the steering wheel for six seconds before the collision, according to NTSB.

To contact the editors responsible for this story: Jon Morgan at jmorgan97@bloomberg.net, Elizabeth Wasserman, Justin Blum