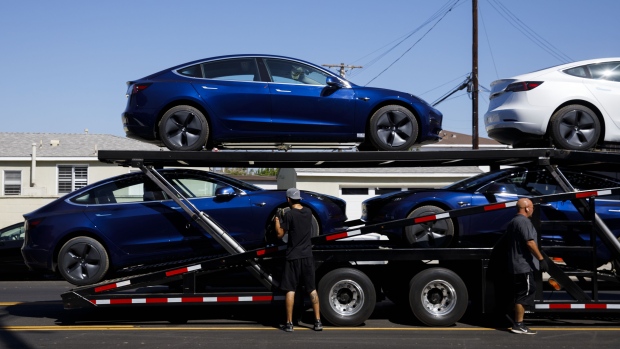 Tesla Inc. (TSLA.O) could be on the verge of a quarterly record for vehicle deliveries, though the electric carmaker will need to go “all out” in the last few days of the month, Chief Executive Officer Elon Musk wrote in an internal memo.

“There is a lot of speculation regarding our vehicle deliveries this quarter,” Musk told employees in an email Tuesday. “The reality is that we are on track to set an all-time record, but it will be very close. However, if we go all out, we can definitely do it!”

Tesla shares have slumped 34 per cent this year, in part due to concern about demand that Musk has repeatedly downplayed. The company has forecast it will deliver 90,000 to 100,000 cars in the second quarter after handing over just 63,000 vehicles to customers in the first three months of the year. The stock rose as much as 1.8 per cent as of 9:50 a.m. Wednesday in New York.

A Tesla representative didn’t respond to a request for comment. The company’s previous best for quarterly deliveries was 90,700 vehicles in the last three months of 2018.

“We already have enough vehicle orders to set a record, but the right cars are not yet all in the right locations,” Musk wrote. “Logistics and final delivery are extremely important, as well as finding demand for vehicle variants that are available locally, but can’t reach people who ordered that variant before the end of the quarter.”

Amid all the attention on Musk’s delivery push, the CEO may have lost a member of his executive team within another key area of the business. Peter Hochholdinger, the head of production in charge of all vehicle manufacturing at Tesla’s factory in Fremont, California, has left the company, Electrek reported. Tesla hired him away from Audi in 2016.

Analysts’ average price target for Tesla shares has slumped to US$269.39 from US$342.84 at the beginning of this year, according to data compiled by Bloomberg. Sixteen analysts recommend selling the stock, compared with eight holds and 12 buys.

Some of Tesla’s skeptics, including Goldman Sachs’s David Tamberrino, are cautioning that while deliveries may beat the low end of the company’s guidance for the second quarter, the strong showing may not be sustainable. The U.S. federal tax credit that Tesla’s Model 3, Model S and Model X will be eligible for shrinks to US$1,875 as of July 1, from US$3,750.

“We believe a downward path for shares will resume as it becomes more clear that sustainable demand for the company’s current products are below expectations,” Tamberrino wrote in a report last week.

Musk, who turns 48 this week, is going to keep on pushing. When asked by a Twitter follower Tuesday what his plans were for celebrating his birthday, his reply echoed his internal email.