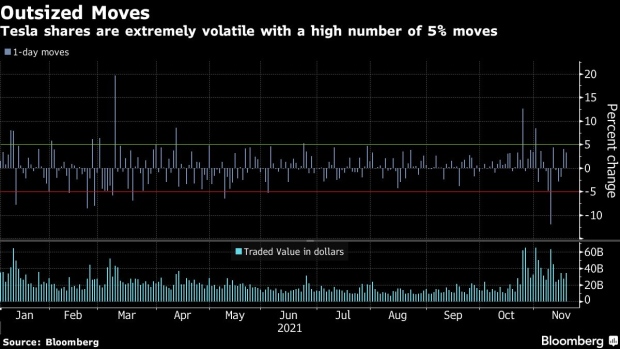 Electric automobiles are displayed inside a Tesla store in Barcelona. , Bloomberg

(Bloomberg) -- Pole position in the electric-vehicle business and a high valuation means Tesla Inc. needs to deliver a blowout quarter to reclaim its trillion-dollar market value.

Tesla’s estimate-beating production and delivery stats have helped boost its projected revenue growth to 46% in 2022, a far cry compared to 20% for General Motors Co. and 15% for Ford Motor Co. The problem is, even after the stock slumped 25% from its November record, Tesla’s dizzying market capitalization of $922 billion is more than 10 times the size of those 100-plus year old Detroit giants.

The broader meltdown in high-growth stocks, spurred by the Federal Reserve’s hawkish stance on monetary policy, adds to the headache for Tesla, which trades at 94 times forward earnings -- among the 10 most expensive members of the S&P 500 Index. What’s more, the specter of aggressive competition could hurt its pricing power as GM, Ford and new entrants such as Rivian Automotive Inc. roll out more electric vehicles.

“If 2022 ends up being a year of more cautiousness toward some of the historical star performers, it is difficult to see why Tesla won’t get caught up in that,” David Jones, chief market strategist at Capital.com, said in an interview.

Even strong fourth-quarter numbers could go only so far in soothing investors’ nervousness about the stock, given its whopping 27,000% run since Tesla went public in 2010.

Wall Street analysts, in aggregate, see the stock going nowhere over the next year: The average price target tracked by Bloomberg is $953, an increase of 4% from Tuesday’s close.

For Wedbush’s Daniel Ives, who has a $1,400 target, the focus on Wednesday’s earnings will be around commentary on deliveries in 2022, the shortage of semiconductors, when production will begin at new factories in Austin, Texas, and Berlin, and the company’s growth and profitability outlook for this year and beyond.

“We believe the emerging fundamental story at Tesla will be back in focus of the Street with currently demand outstripping supply for Musk & Co. by roughly 30% globally based on our estimates,” he wrote in a note.

After Peloton Interactive Inc., Netflix Inc. has now wiped out almost all of its pandemic gains, leaving shares at almost half the record high in November after its poor outlook last week. Shares of the pandemic-era trading favorites have gotten caught up in a widespread rotation out of growth stocks, as concerns over inflation and Federal Reserve tightening have made investors less tolerant of high-valuation names.