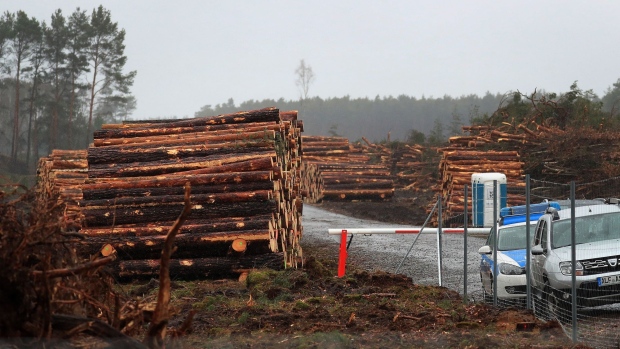 GRUENHEIDE, GERMANY - APRIL 21: (EDITOR'S NOTE: Photo taken with a drone.) In this aerial view the site of the new Tesla factory stands cleared of trees on April 21, 2020 near Gruenheide, Germany. Tesla plans on building its first European Gigafactory at the site, located near Berlin, to eventually produce up to 500,000 electric cars per year. Tesla is seeking to begin car production there by the summer of 2021. (Photo by Sean Gallup/Getty Images) , Photographer: Sean Gallup/Getty Images Europe

(Bloomberg) -- Tesla Inc. could be on track to complete its new plant near Berlin more quickly than its Shanghai facility, according to a local government minister.

The U.S. carmaker has said it wants to finish the factory in Gruenheide by the middle of 2021, and faster than the Chinese operation, which went up in less than a year. The German project has been hampered by minor setbacks, including criticism from local citizens concerned about deforestation and water usage.

“The goal at Tesla seems to be to beat the construction time for the Gigafactory 3 in Shanghai,” Joerg Steinbach, Economy Minister for the state of Brandenburg where the plant is located, was quoted as saying Sunday in Germany’s Welt am Sonntag newspaper. “According to my observation, this could very well succeed.”

Helping to complete the project swiftly would be a boost to the Brandenburg government, which has struggled to complete a long-delayed new airport to serve the state and the capital.