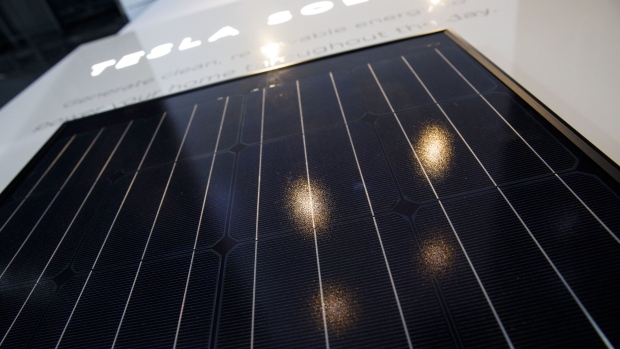 A Tesla Inc. solar panel is displayed during AutoMobility LA ahead of the Los Angeles Auto Show in Los Angeles, California, U.S., on Thursday, Nov. 30, 2017. , Bloomberg

(Bloomberg) -- Tesla Inc. shares extended declines on Monday and were on track to close in a bear market as a rout in growth stocks and a report that regulators opened an investigation into the electric-vehicle company sent the stock lower for a fourth trading session.

The electric vehicle maker’s stock fell as much as 6.4% to $950.50 in morning trading in New York, pushing its market value below the $1 trillion threshold for the first time since late October. That is a 23% decline from the record closing high of $1,229.91 touched barely a month back on Nov. 4. A stock is said to enter a bear market when it falls 20% on a closing basis.

Reuters reported Monday that the Securities and Exchange Commission opened an investigation into Tesla over whistle-blower claims on solar panel defects, citing a letter from the agency.

Tesla shares have pulled back sharply over the past week as fear about the omicron variant of the coronavirus and a hawkish message from Federal Reserve Chair Jerome Powell gripped markets. These factors weighed especially heavily on technology stocks and the so-called momentum names. A steady offloading of the shares by the company’s Chief Executive Officer Elon Musk, who has now sold off more than $10 billion worth of stock, has also been a drag on investor sentiment.

Given Musk still has a ways to go before selling 10% of his stake -- as discussed in a Twitter poll early November -- Tesla shares may continue to slide some more in the coming weeks.

Despite this latest weakness, Tesla shares are still up 39% this year, compared to a 22% climb in the S&P 500 Index.

Most of those gains came from a surge in October after a rush of positive news -- including strong results for the third quarter and a big order from rental-car company Hertz Global Holdings Inc.

The other prominent EV startups that have seen their share prices soar in recent weeks were also trading lower on Monday. Newly public Rivian Automotive Inc. dropped as much as 4.2%, while Lucid Group Inc. tumbled 19% after disclosing that it received a subpoena from the SEC on Friday.