Tesla Inc. displaced Toyota Motor Corp. as the world’s most valuable automaker, underscoring investor enthusiasm for a company trying to transform an industry that’s relied on internal combustion engines for more than 130 years.

Shares of Tesla, which have more than doubled since the start of the year, climbed as much as 3.5 per cent in intraday trading Wednesday, giving it a market capitalization of US$207.2 billion, surpassing Toyota’s US$201.9 billion.

Chief Executive Officer Elon Musk has ignored or broken many of the established auto industry’s rules and norms in the 10 years since he took Tesla public, selling cars online and assembling vehicles in high-cost California. But while his company’s value has soared, there remains a gulf in the scale of his company and the world’s biggest car manufacturers. 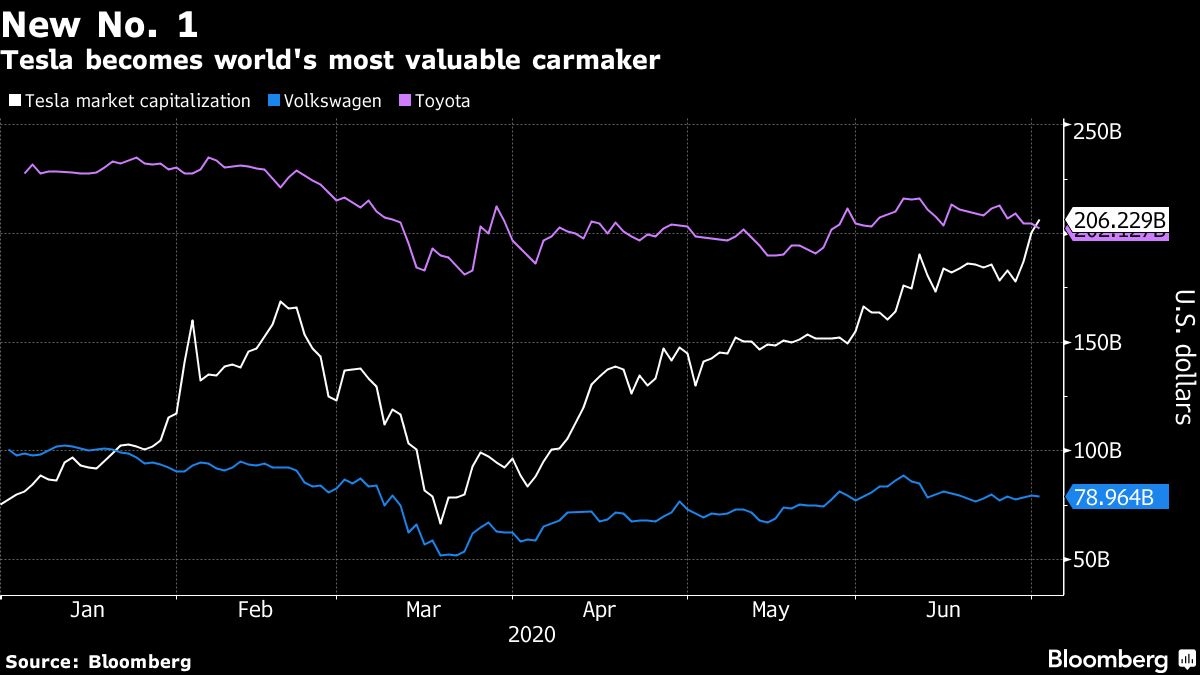 Tesla produced 103,000 vehicles in the first quarter, or about four per cent of the almost 2.4 million made by Toyota, which built its brand on affordability and reliability backed by innovations in large-scale manufacturing.

Tesla became the world’s second-most valuable automaker in January, when it surpassed Volkswagen AG. It’s now worth more than twice the German giant.

After pioneering gas-electric vehicles with the Prius hybrid, Toyota was late to shift to fully electric autos and has wagered heavily on hydrogen fuel cells. The company is now making a series of high-profile investments in EVs and self-driving cars. The manufacturer has forecast an 80 per cent plunge in profit this year and expects it could take until the first half of next year before the auto market recovers to pre-pandemic levels.

Toyota’s market valuation includes the 14.3 per cent of shares that Toyota itself holds as treasury stock, worth around $30 billion. Tesla doesn’t hold any treasury shares, according to data compiled by Bloomberg.